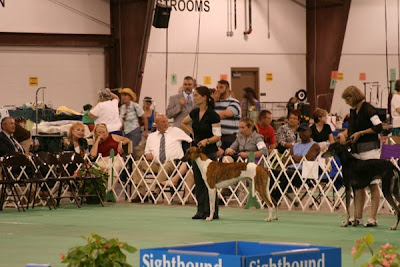 Sunday was our last day of competition at Premier and everyone was pooped to say the least. Both conformation and terrier racing were scheduled for 9:00am, which made things tricky for us yet again, but thankfully everyone was very understanding and accommodating so we were able to do both without too much friction.

The conformation judge for Sunday was Steven Melgreen. Mr. Melgreen was very complimentary and thorough, noting that he was particularly pleased with Gil's muscle tone and conditioning but thought that all the sighthounds needed some work done on their toenails. Every judge is different, and I took both comments into consideration for the future. Gil was Best of Breed again, but did not pick up a placement in group.

Since Opal was scratched from racing we decided to let her have a go at the new lure coursing program for all breeds. Both Opal and Bandit got to run the course once and both received a qualifying leg towards their "Coursing Aptitude" degree. More importantly, both had a fantastic time!

And so concludes our Premier Adventure. It was definitely a trip to remember and one for the MA history book. According to UKC officials, the 2011 Premier will be held in Richmond again next year. I'm not sure if we're going to make it but it's definitely an event I would attend again in the future.
Posted by Stoutheartedhounds at 10:42 PM