This report is a little late, but I have a good excuse. Shortly after this trip I had to start to buckle down and study for my final exams. Now, on the eve of my very last exam I found some time to sit down and report on our first hunt of the season.

Gil and Fecni were both entered, and we were very excited to welcome our Silken Windhound friends for their very first official hunt. In addition to the MAs and Silkens there was a full stake of Ibizans and a lone Deerhound bitch. The MAs, Silkens and Deerhound made up the second stake of rare breeds, which added us up to two rare breed hunts and one Borzoi hunt.

Due to the very heavy cover it was very difficult for the dogs to get sighted and stay sighted. However, the rabbits weren't quite ready for us after having spent all summer snoozing and fattening up. The very first course of Borzoi resulted in an AK within the first 50 feet of the run!

From then on it wasn't hard for us to find the rabbits but it sure was hard for the dogs to chase them very far before they would duck into the brush.

Gil's prelim course was one of two good long courses we had that day. Below is a graphic image of his course transcribed from my Garmin GPS: 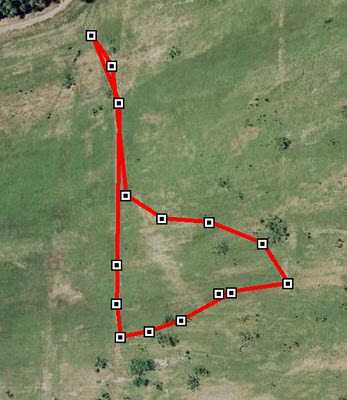 You can see at the top that he makes a 180 degree turn. I thought he almost had it at that point, but the hare managed to get away just in time.

The second rabbit that Gil ran wasn't as lucky. The jack popped right under our feet and almost as soon as I let Gil go he caught it. I don't think he ran more than 50 feet before he caught him; not much of a run but definitely very exciting!

That UK put Gil at the top of the line up at the end of the day, followed by the Deerhound in second. Fecni settled for a fifth place tie, but she redeemed herself at our last outing (more on that later ...)
Posted by Stoutheartedhounds at 6:09 PM 2 comments: 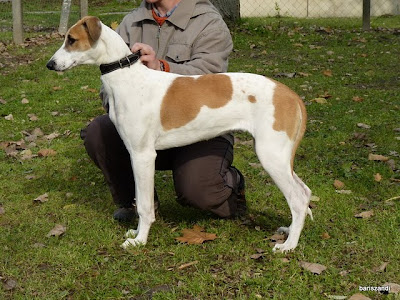 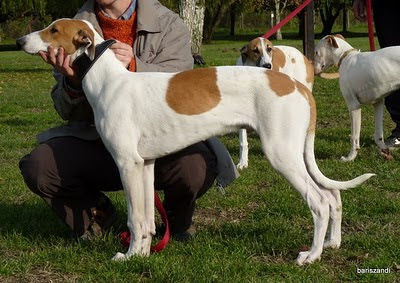 Vakvagta Joslat
There are two beautiful puppies from the Vakvagta "J" litter that are still looking for their forever homes; one male and one female. These two pups are half siblings to our Fecni (same dam, different sire) and are located in Hungary.

These pups would make excellent racing, coursing and show prospects. Their pedigree can be viewed online here: http://www.sighthound-trophy.com/madb/testmating_show.php?sire=345&dam=721&actio%20n=Check

If you're interested in giving one of these pups a home you can contact their breeder, Annamária Lóky, at email: bijoufoxi@gmail.com

We have lots of experience importing dogs from Europe and would be happy to help in any way we can.
Posted by Stoutheartedhounds at 11:37 AM No comments: