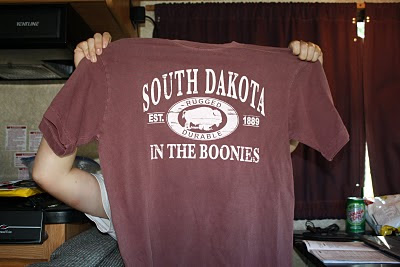 We have arrived in Sioux Falls, South Dakota. The camp is nice and the scenery has been beautiful but we're looking forward to moving on to Rapid City tomorrow so we can hopefully catch a glimpse of Mount Rushmore.

The most exciting thing that's happened today is seeing Ol' Man River. We crossed over the Mississippi when we crossed into Minnesota. It's quite a site :)

Getting back to our Premier adventure, Thursday was our first day of competition. Both Gil and Fecni were scheduled to show in the Top Ten Invitational early in the morning along with hundreds of other dogs that had been invited to attend. For those who don't know, Top Ten is a special conformation competition for dogs that made it into the top ten rankings for their breed. Over the course of the year, dogs that defeat others of their own breed at UKC conformation shows earn top ten points for each dog they beat. The points are tallied and the dogs are ranked from 1 to 10. The top 10 dogs in each breed then get a chance to compete for "Best of the Top Ten" every year at Premier.

The Top Ten competition is broken down into three segments. The first part consists of choosing a best of breed winner from among the top ten dogs in each breed. Unfortunately only two of the top ten MAs (Gil and Fecni) were able to attend but some of the more popular breeds actually have all ten dogs in attendance.

For this first part of the Top Ten competition the two MAs were judged by Paul Bruneau. Mr. Bruneau did a thorough examination of both dogs and told us that he was very impressed with their quality. He even invited us to come and show them in Florida where he does most of his judging (maybe someday we'll make that trip). Although he liked both Gil and Fecni very much he ultimately conferred the Top Ten Best of Breed award to Gil. Even though there were only two dogs in competition I was thrilled with the win and the compliments the dogs received. 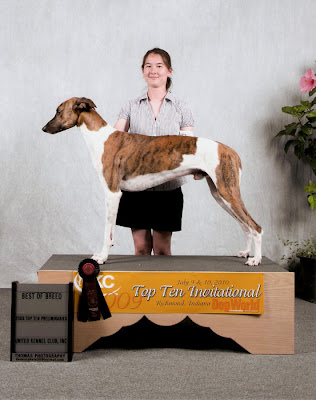 After the best of breed dogs were all chosen we moved on to the semi final round of the Top Ten competition. In this round all the best of breed winners are basically tossed into a hat and drawn at random into one of five large groups to be judged by a different judge whose name is not disclosed until the judging is about the begin. Robert Collins presided over Gil's group which consisted of, in part, the Doberman Pinscher, the American Pit Bull Terrier, the Irish Wolfhound, the French Bulldog and many others.

Only four dogs from each group are selected to go on to the final round of competition and even though Gil showed well he was not one of the four chosen. Oh well, better luck next time. We still had three more shows ahead of us ...
Posted by Stoutheartedhounds at 3:34 PM