Farewell to a Good Girl

On February 16th, 2014, I said goodbye to my girl Pesh. She was coursing a hare with her father and brother at this year's Grand Course when they all fell into a large irrigation ditch. While Pi and Gil emerged from the pit relatively unscathed, Pesh ultimately succumbed to internal injuries and passed away while en-route to the vet hospital. Even though it's been two days since her passing, I am still shocked that such a vibrant young dog is gone. I really don't know what else to say except that I'd like to tell her story, in hopes that by looking back at her life I can come to terms with her death.

As some of you may already know, Pesh and her siblings were my introduction to the joys and frustrations of raising a litter of puppies. The first two pups in the litter were stillborn, and just as I was beginning to think that I was going to lose all the puppies, little Pesh was born. She was small, but strong and healthy, and she was screaming like a little baby dinosaur. All through her infancy she was dwarfed by her brother and sister, but she never noticed.

Over the next several months, Pesh grew into a beautiful young girl, albeit she was extremely mischievous and stubborn. I could always count on her to make a mess out of the toilet paper and/or steal food off the counter, and she never did grow out of her bad habits.

Shortly after her first birthday, Pesh went to live with her owner, Jairi. While the two struggled to see eye to eye on more than one occasion, Pesh thrived in her care. During the short time they spent together, Pesh became a UKC bench champion and Canine Good Citizen, earned her first Rally obedience title, and spent many happy days racing, lure coursing, and open field coursing. She wasn't the fastest Agar in town, but she never gave any less than 200% of her effort on the track or field.

She had all the feist and fire of the bulldogs she shared her home with, and her prey drive was off the charts. But she was also loving and gentle, and enjoyed doting on young children, including Jairi's little boy, Rhett.

I am forever indebted to Jairi for giving Pesh the very best home I could ever hope for, and to Tom for being the rock I needed to lean on during the whole ordeal. I don't know what I would have done without you, Tom. It's still hard for me to believe that she's really gone. She was my little ray of hope when I thought I was going to lose everything. She was the first one to wag her tail and offer kisses, and she never stopped doing that for the rest of her life.

I love you baby girl, and I hope you knew that. You three pups are the best thing that ever happened in my life. You are always in my heart
Posted by Stoutheartedhounds at 9:54 AM No comments: 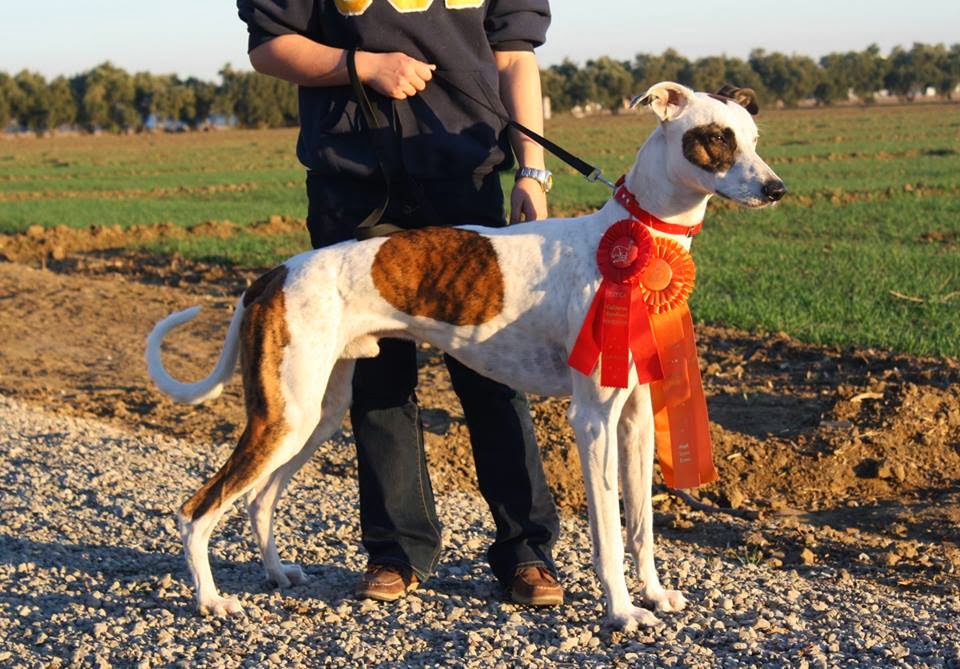 Pi with his ribbons, completing his Coursing Championship and Courser of Merit titles

Over the weekend of January 11th and 12th, Pi became the first American-born, and second Magyar Agar ever to earn the NOFCA titles of Coursing Champion and Courser of Merit! For those who may not know, to earn a CC a hound must have earned 100 points with at least 10 coming from mixed hunts and 10 coming from breed hunts, have earned either one 1st placement or two 2nd placements in either mixed or breed stakes, and have either one unassisted take or two assisted takes. At the start of the weekend, Pi only needed one more 2nd placement and a few more breed points. 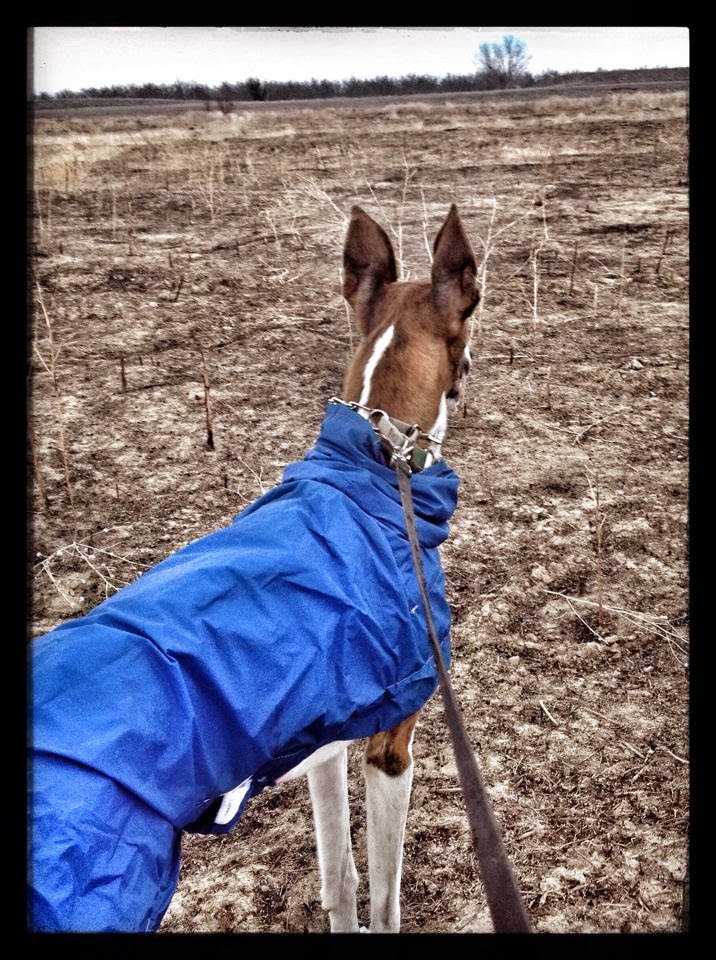 Gil looking for rabbits on a cold winter morning

On Saturday, I took Gil and Pi to the last rare breed hunt of the season, hoping Pi could pick up the placement and points he needed. We ended up having three separate stakes; one Ibizan Hound stake, one Silken Windhound stake, and one "leftover" stake as I like to call them (which consisted of Gil, Pi, three Afghan Hounds, and two Pharaoh Hounds). 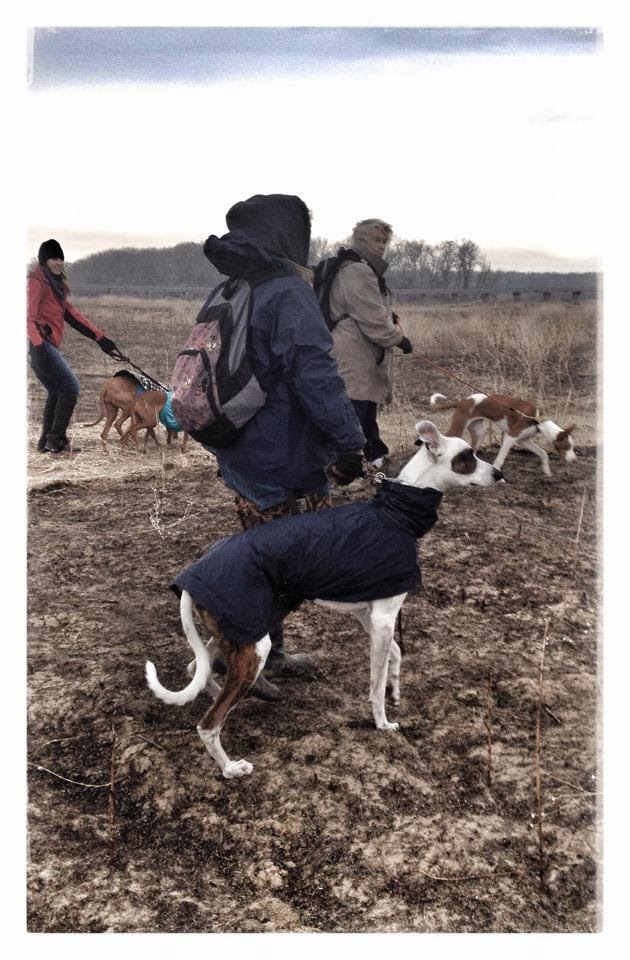 Pi and Ruthye looking very matchy-matchy in the field

We started hunting in a portion of the field that had recently been burned down, so there was very little cover, but there had been a lot of hares hiding out there in weeks prior. Pi drew the first course with one of the Afghans and one of the Pharaohs. The hare broke rather far out, but Pi was sighted and took off after it. Unfortunately the Afghan went unsighted. There wasn't much of a course from what I could see, but Pi led the whole way so I had high hopes for him finishing his titles that day.

Gil drew the second course, again with one Afghan and one Pharaoh. The first run was on a hare that was way too far out. Gil was sighted, but was only able to run it to the edge of the brushline before it got away. The judge decided that we would rerun the course after the last course in this stake. The second hare that Gil got was much closer and cut in front of us going right. The Afghan got a good slip and led for awhile until Gil did a go-by. According to one spectator, Gil made a dive for the rabbit but just missed it (darn!). 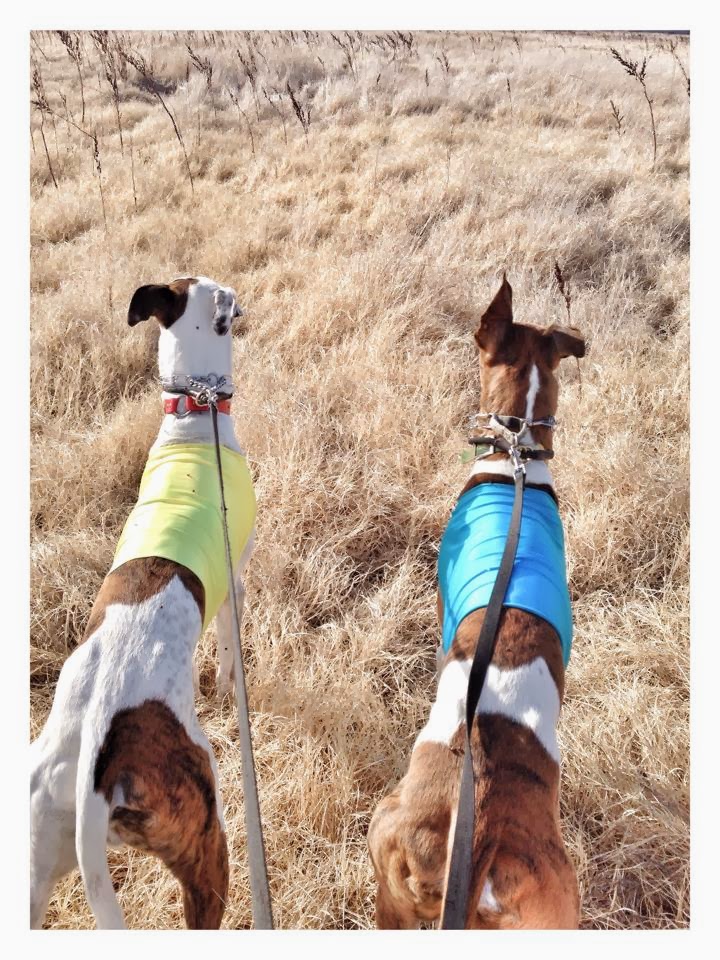 Pi and Gil wait their turn to run in finals

The judge decided only to bring up the course winners from each run, which left us with one finals course: Gil, Pi, and an Afghan. I decided to double slip my boys, just to see if I could do it. By this time we had reached the main part of the field where there was plenty of brush and tall grass. We had not walked far before a rabbit jumped just to our left under the feet of a gallery member. I got a good, even slip on both boys and they took off, running right alongside each other stride for stride. Both of them tried to take the lead, which resulted in a little bumping around before the hare turned for the first time. I thought that they were going to take it at that point, but it slipped away and made another turn to the right. All I remember at that point was seeing Pi slightly ahead of Gil before they disappeared into the higher cover. Gil must have retaken the lead at some point, because he ended up winning the course, with Pi running second.

At the end of the day, Gil took 1st place in the leftover stake and Pi took 2nd, giving him the last placement and points he needed to finish his CC! After doing some quick math in my head I determined that he still needed a handful of breed points to finish his CM. He would have the opportunity to get those last few points the following day at the NOFCA mixed hunt. 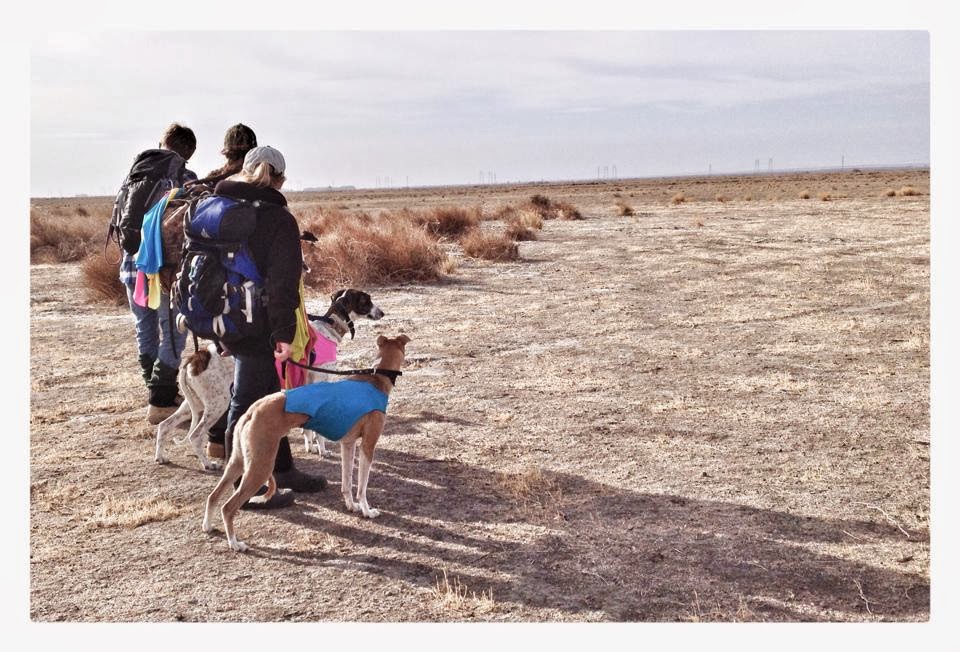 Pesh on the line looking for a hare

The next morning we met up with Peshamba and Bukra the Saluki for the mixed hunt. We had a full stake, so I planned to be out in the field all day. As it turned out, we were very lucky and finished on finals by 11:30am! 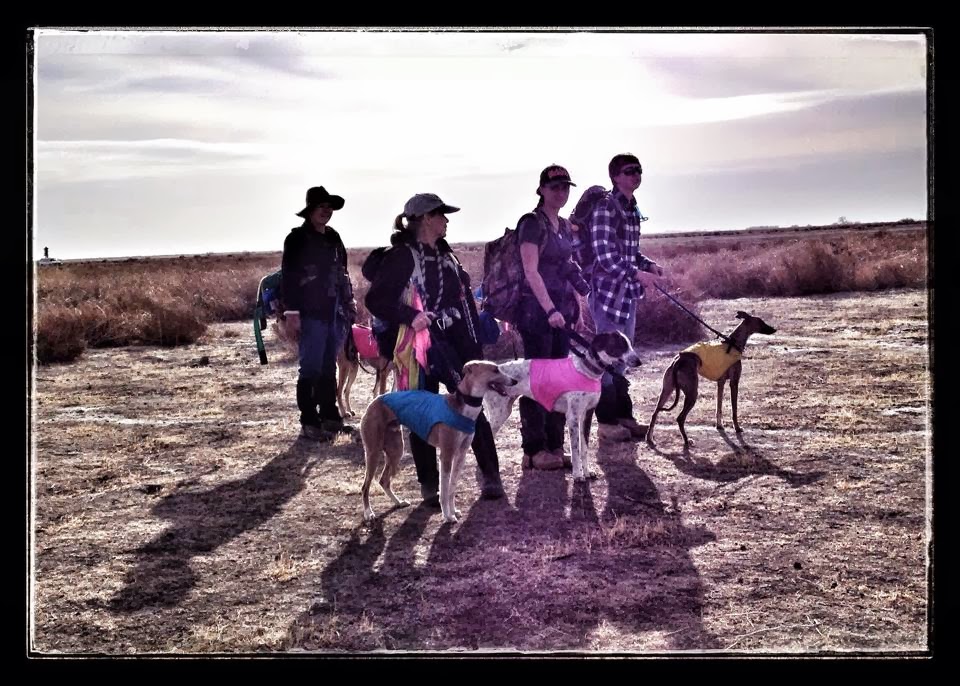 Pesh getting ready to run

While both Pi and Pesh were thoroughly "whippeted" they still had a great time, and Pi finished his CM with 5 High Score Breed points for being the highest scoring Magyar Agar of the day. 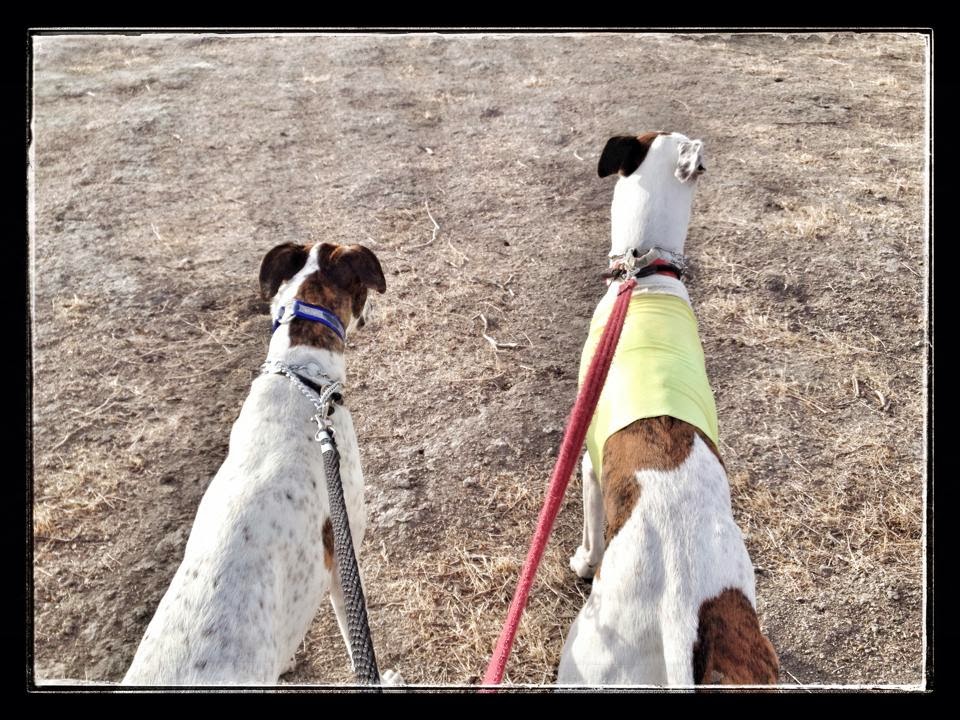 With that comes the end of the regular coursing season, with the exception of the Grand Course to be held later this month. Stay tuned for a report on that in the weeks following. 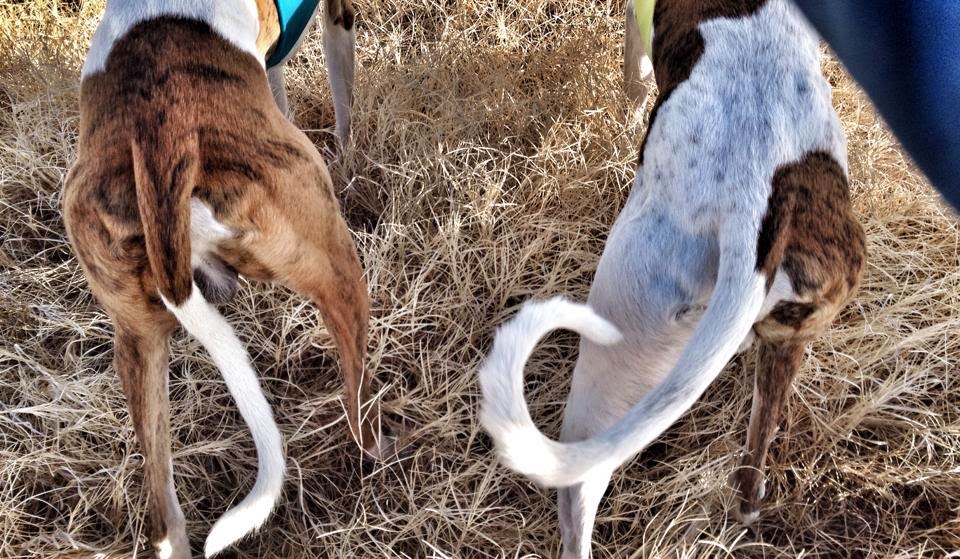 A gratuitous butt shot to mark the end of the season ;)
Posted by Stoutheartedhounds at 3:02 PM No comments: