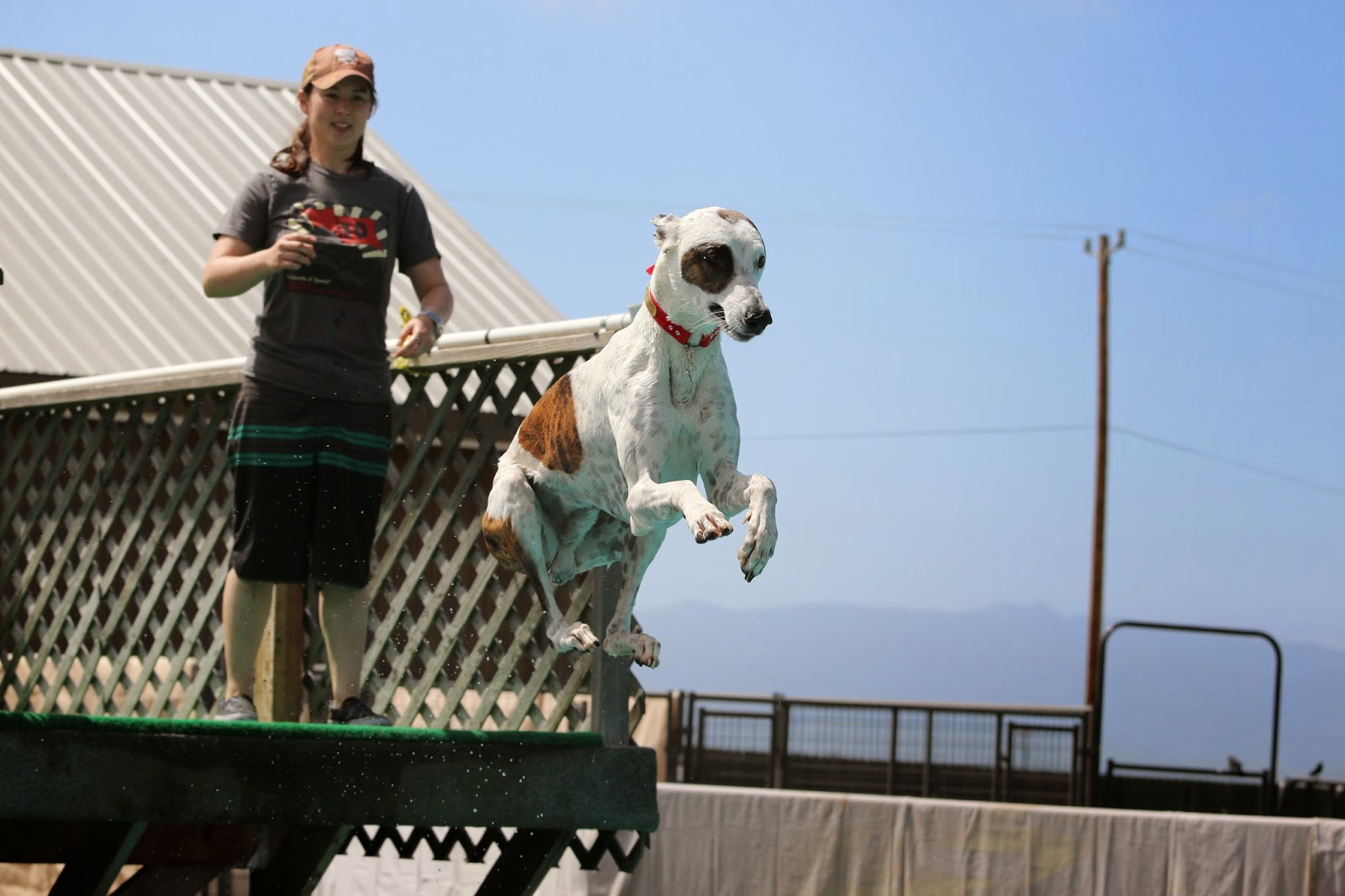 I really despise hot weather; even temperatures in the mid to low 80's annoys me. In the past I really had nothing to look forward to in the summertime in terms of dog events, because it's really too hot to do anything, even go to a dog show (unless it's indoors). All of that changed once Pi got started in dock diving competitions last year; and while it's not my personal favorite activity, he really enjoys it and it gives us something to do during the summer months. 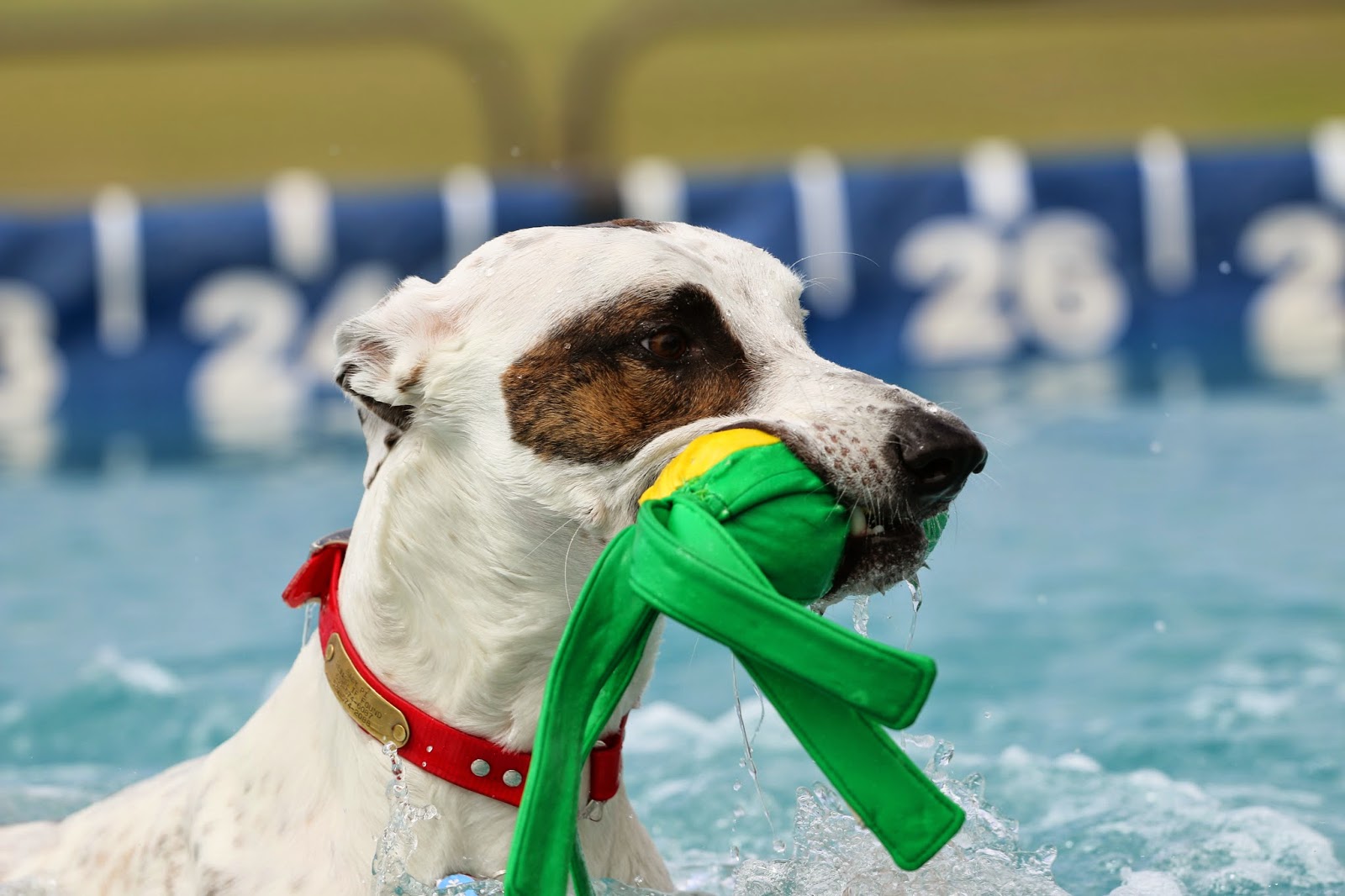 The weather here has been hovering in the mid to high 80's in recent weeks, so I decided that it wouldn't be a bad time to take Pi out for a dive or two before the summer, just to make sure he still remembered how to play the game. 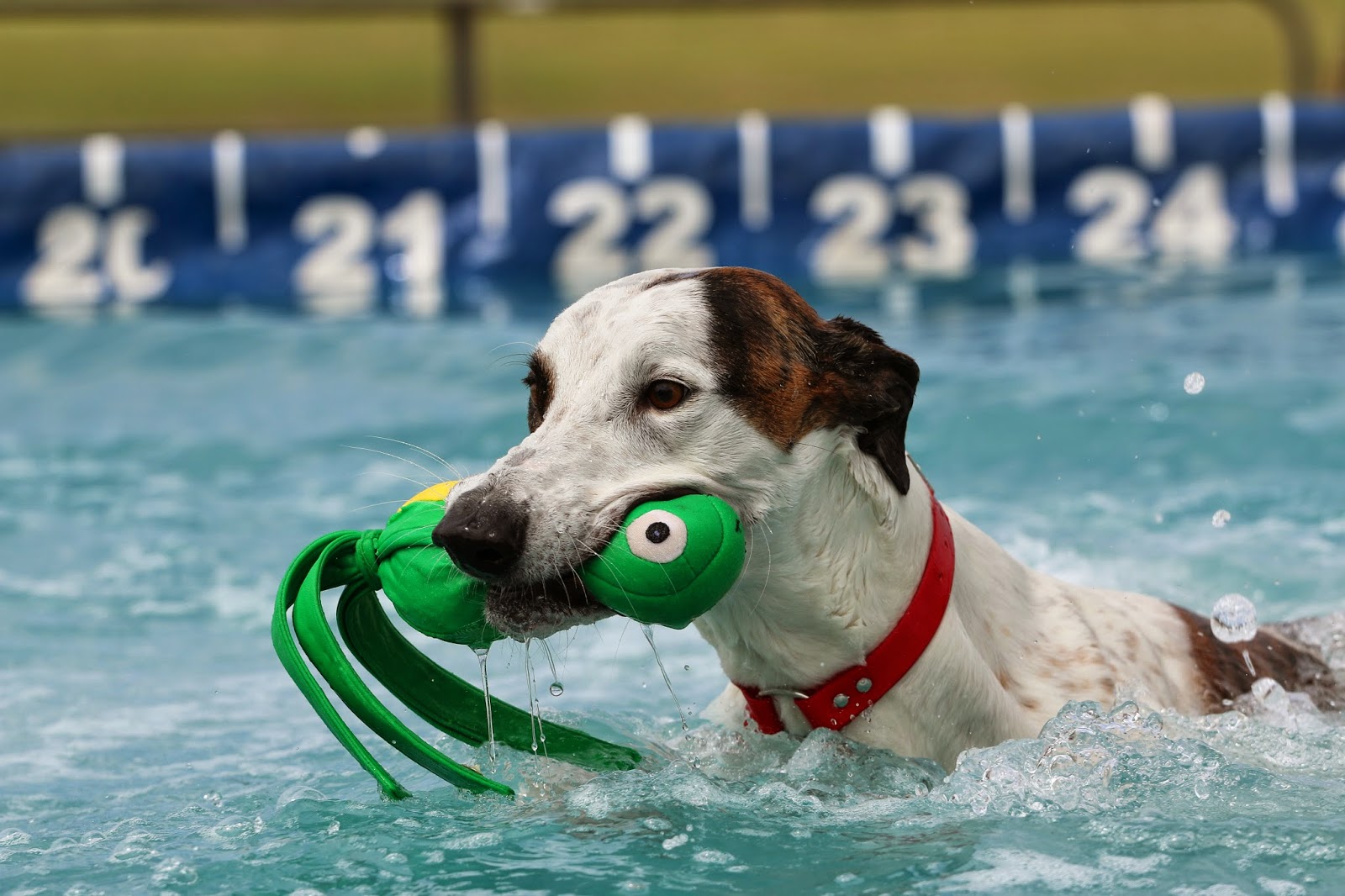 So, on April 12th we made the long drive down to the Doggone Dirty Dock Diving Facility in Hollister. There were four splashes that day, but I only entered two of them; first, because I didn't feel like waking up at the crack of dawn so that we could arrive by 9:00am, and second because I was sure it wouldn't be terribly warm that early in the morning and I didn't want to run the risk of Pi losing enthusiasm for being chilly. 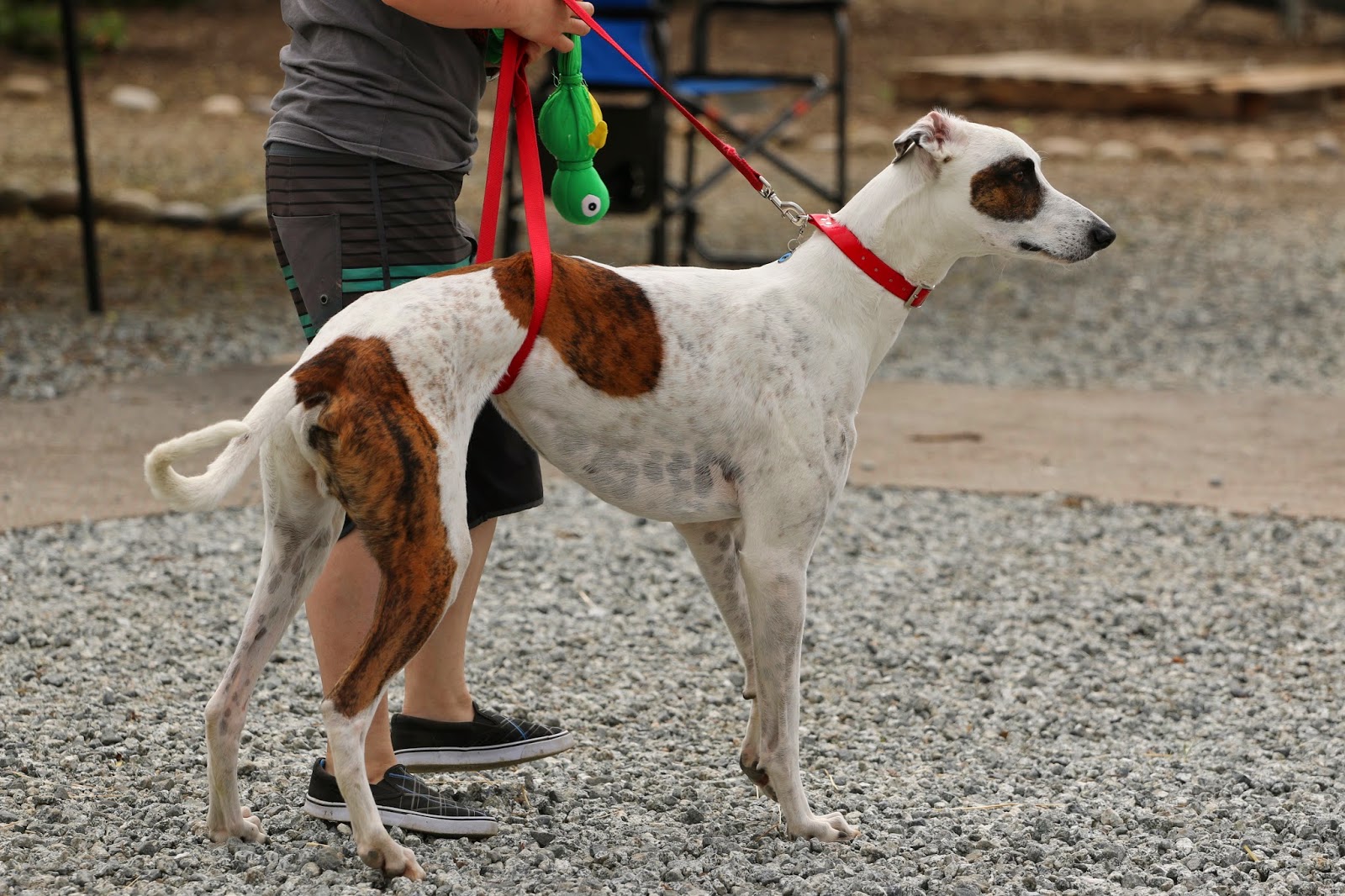 So we arrived around 11:00am, giving me enough time to get my stuff set up and get a practice dive or two in before the splash started at noon. While waiting in line for our turn to practice, Pi was quite excited and animated just watching the other dogs jump, so it looked like he still remembered the game and, hopefully, was still willing to play. He did two practice jumps with no hesitation other than a slight faltering at the edge of the dock, which he has a tendency to do anyway. 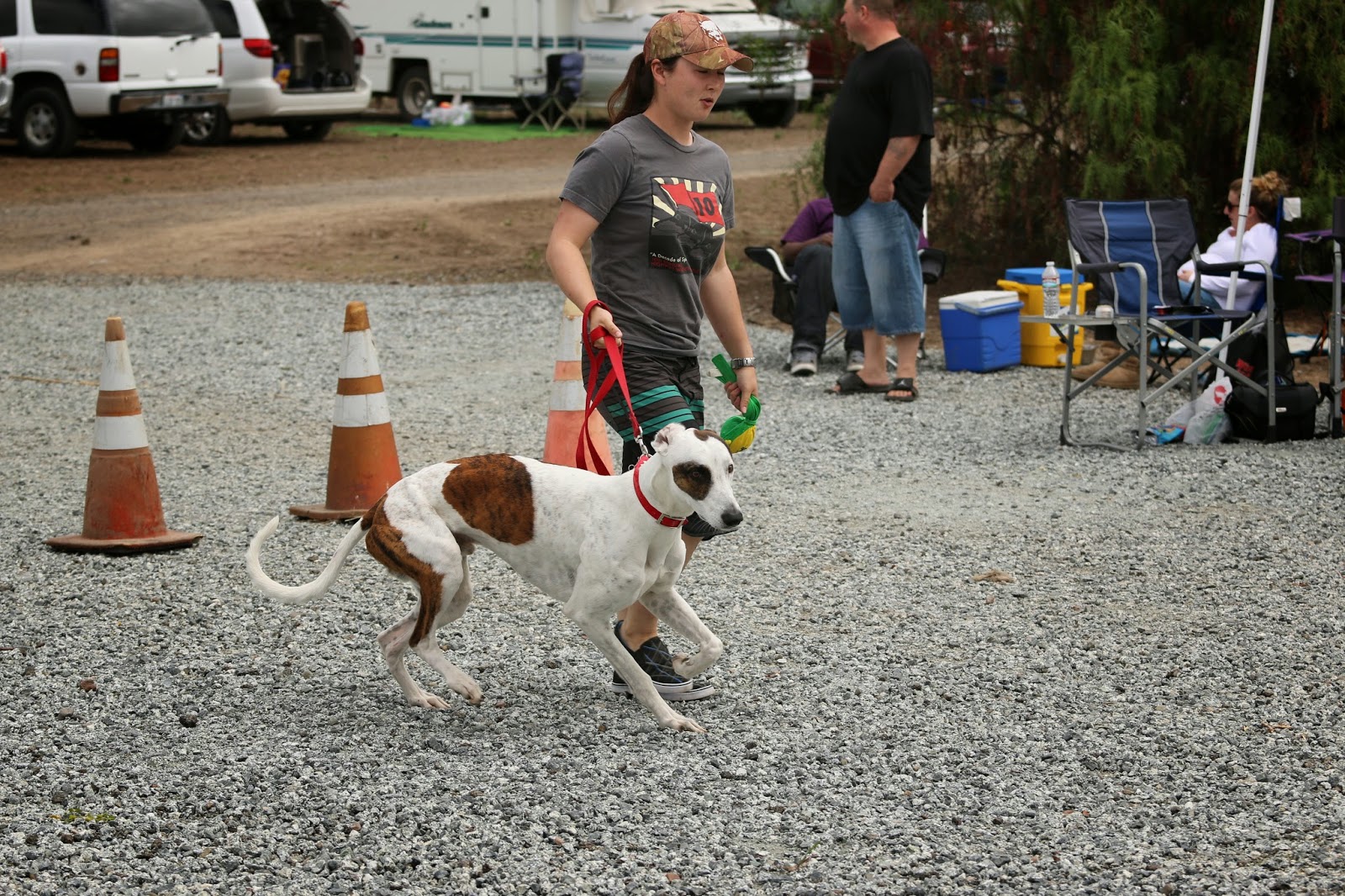 Pi is not known for being patient
Photo by Kaylee Jeske

He was called first in the noon splash, and made two very good jumps. The first jump measured 14 feet 5 inches, which ended up being his longest jump of the day and earned him a first place in the Junior Division (out of 4 total in the same division). His second jump in that splash was significantly shorter at 11 feet 6 inches. I probably need to work on getting him more amp'd up the second time around in addition to working on overall technique. 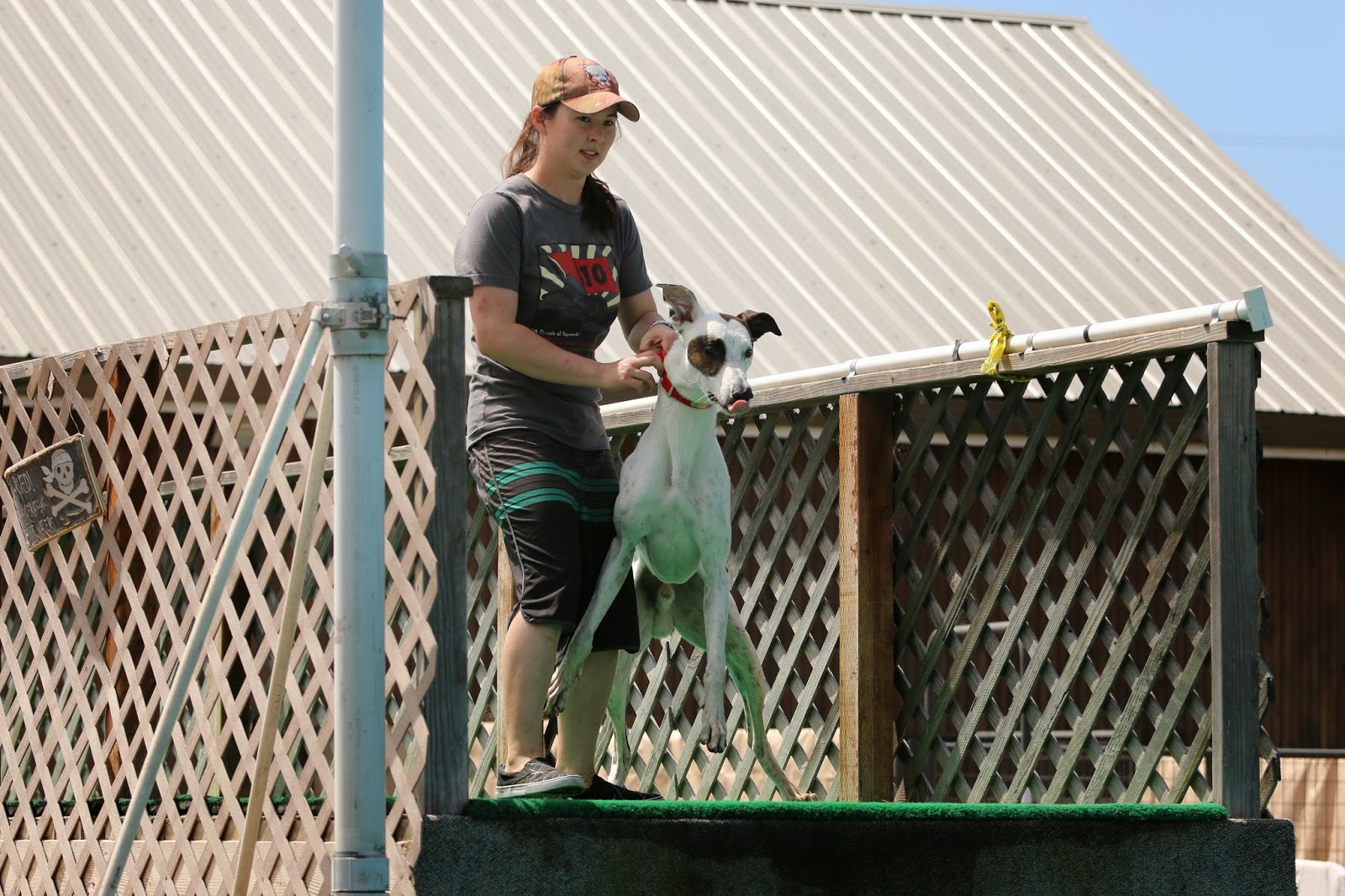 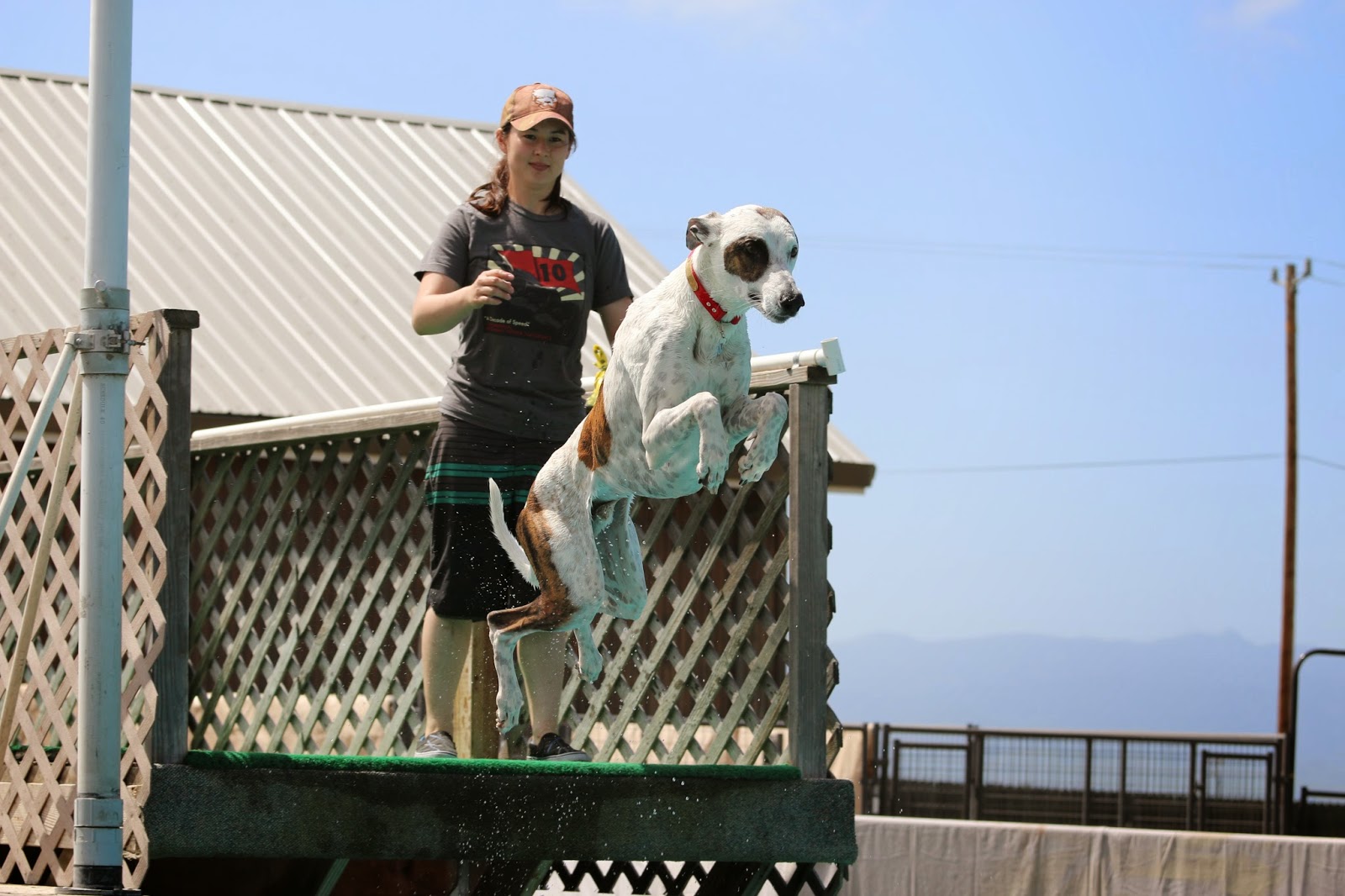 The next splash had a slightly larger entry, which always makes things a bit more exciting. Both of Pi's jumps also ended up putting him the Junior Division; the first jump measured 12 feet 10 inches, and the second jump measured 13 feet 3 inches. 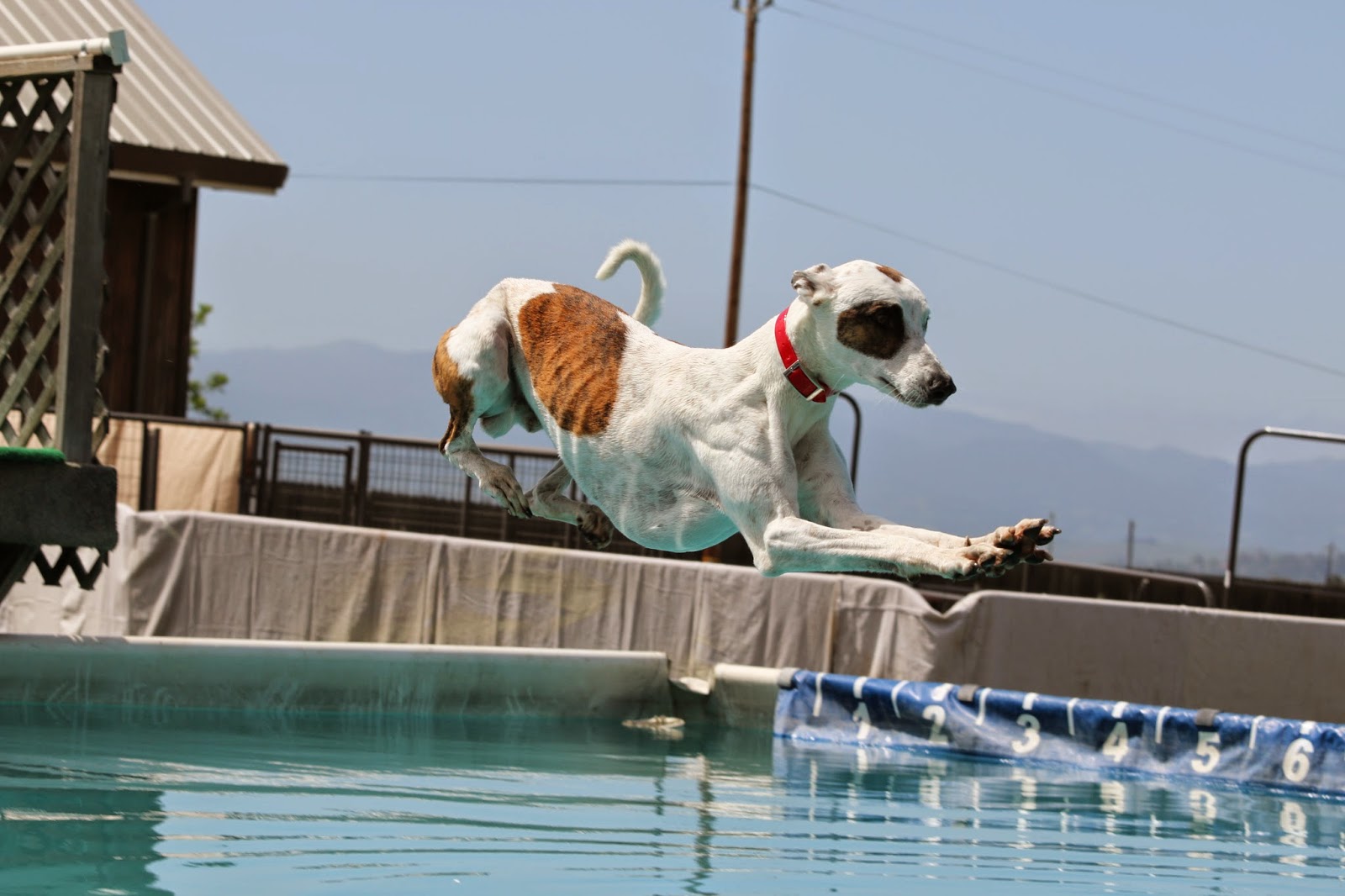 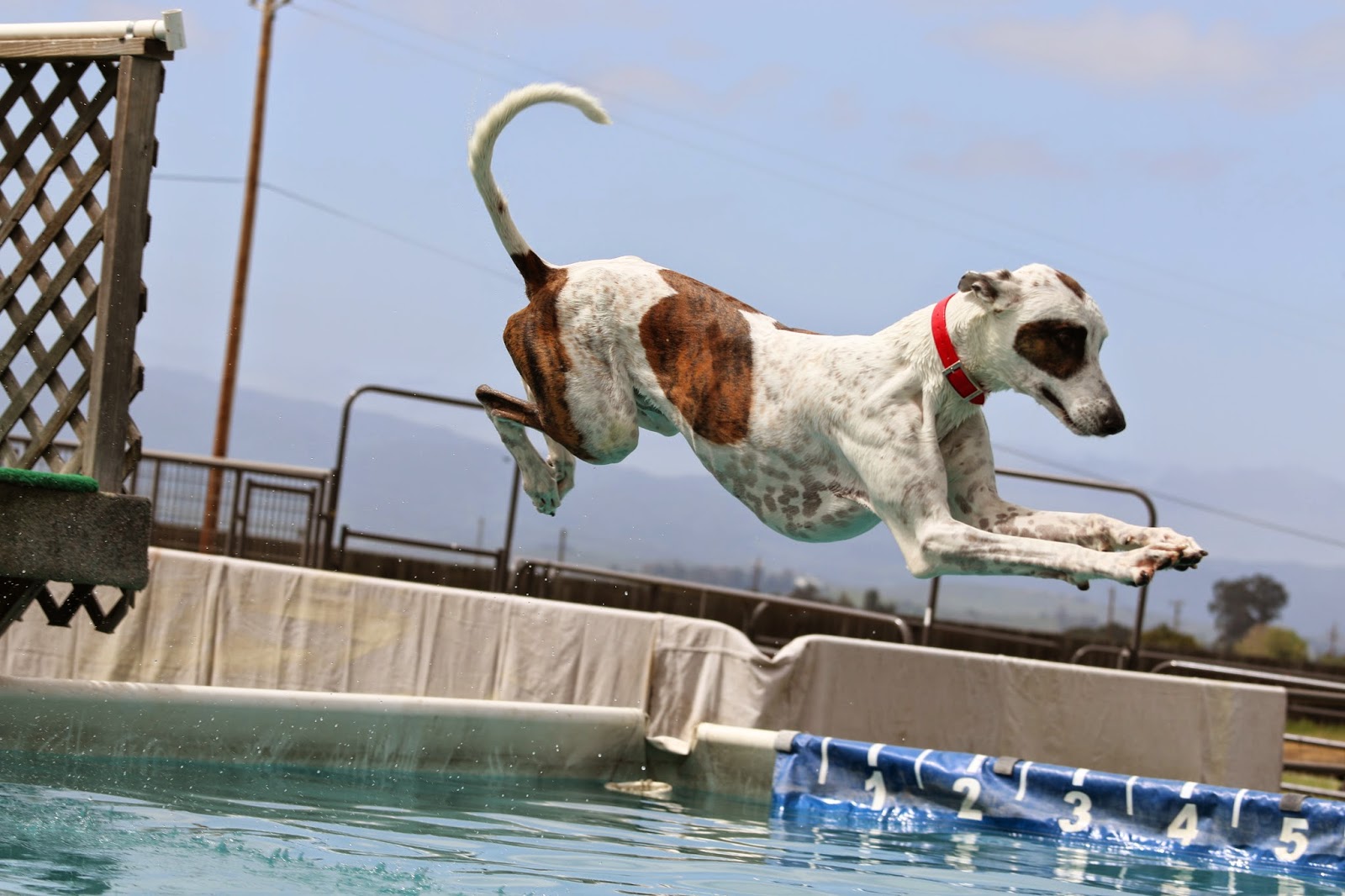 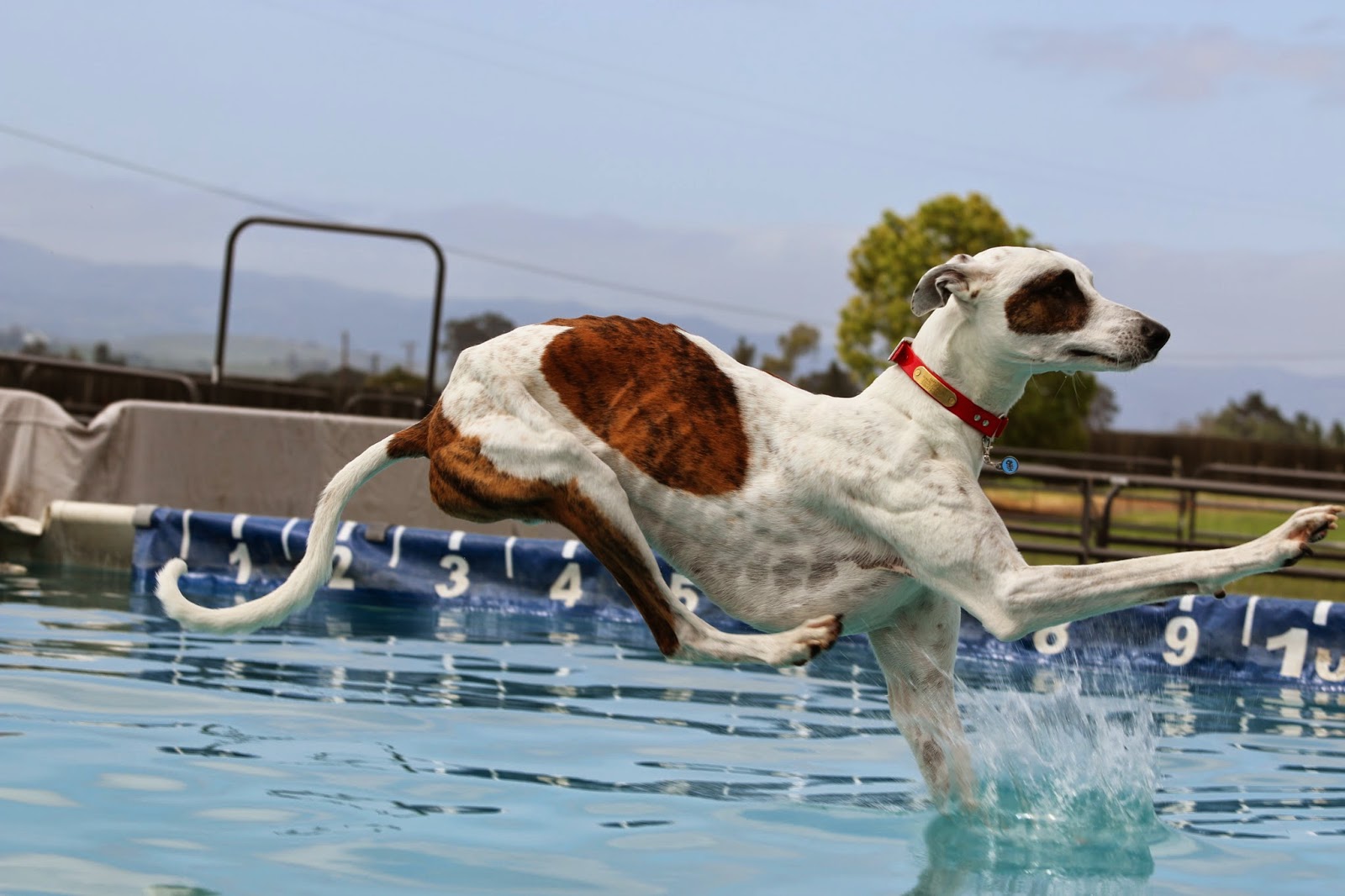 That longer jump earned him a second place in the Junior Division (out of 6 total), and also earned him his "JD" dock diving title. Dock diving isn't the original vocation of the Magyar Agar, but it's still fun to achieve new milestones with a breed, particularly a rare breed. 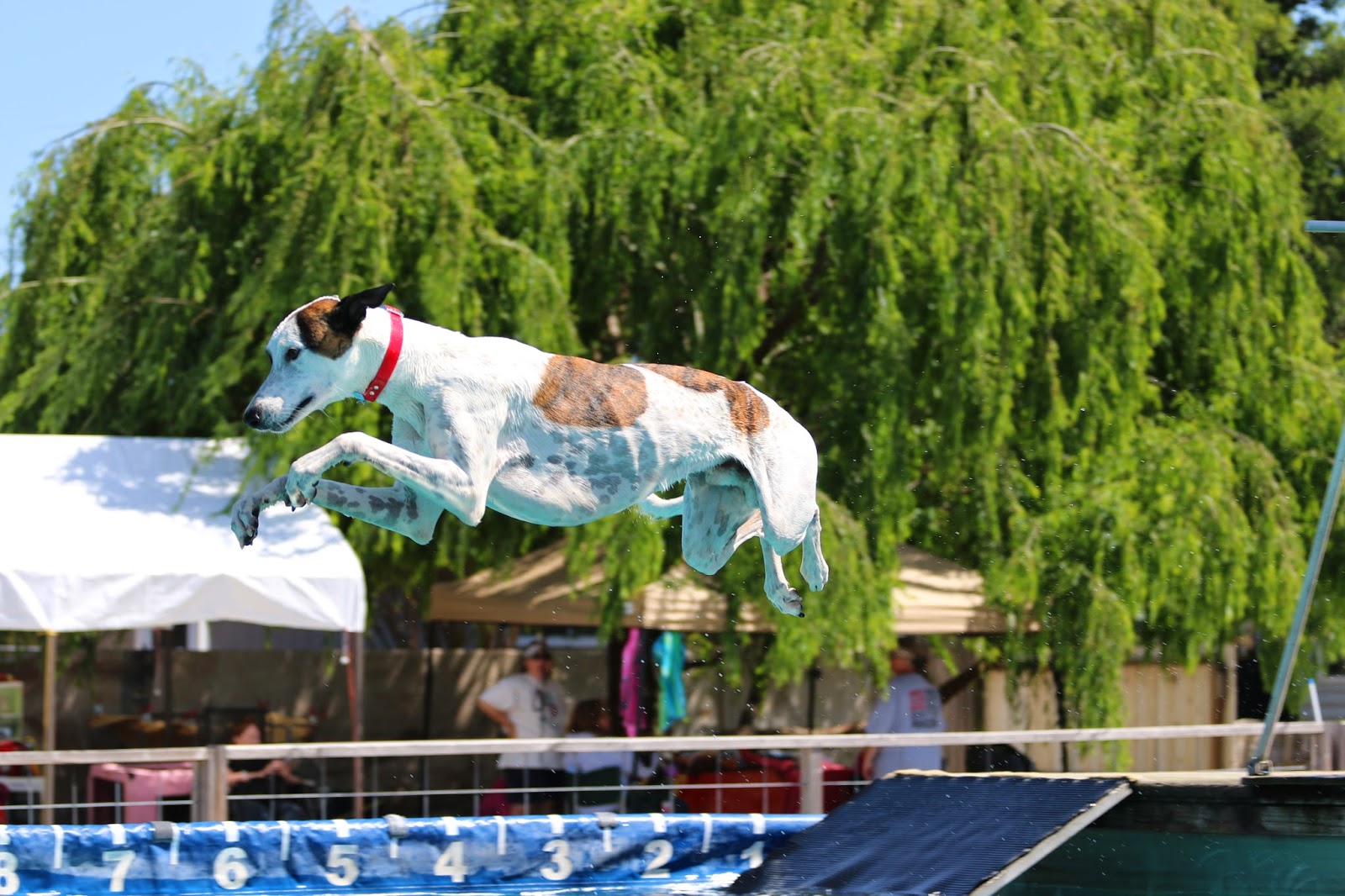 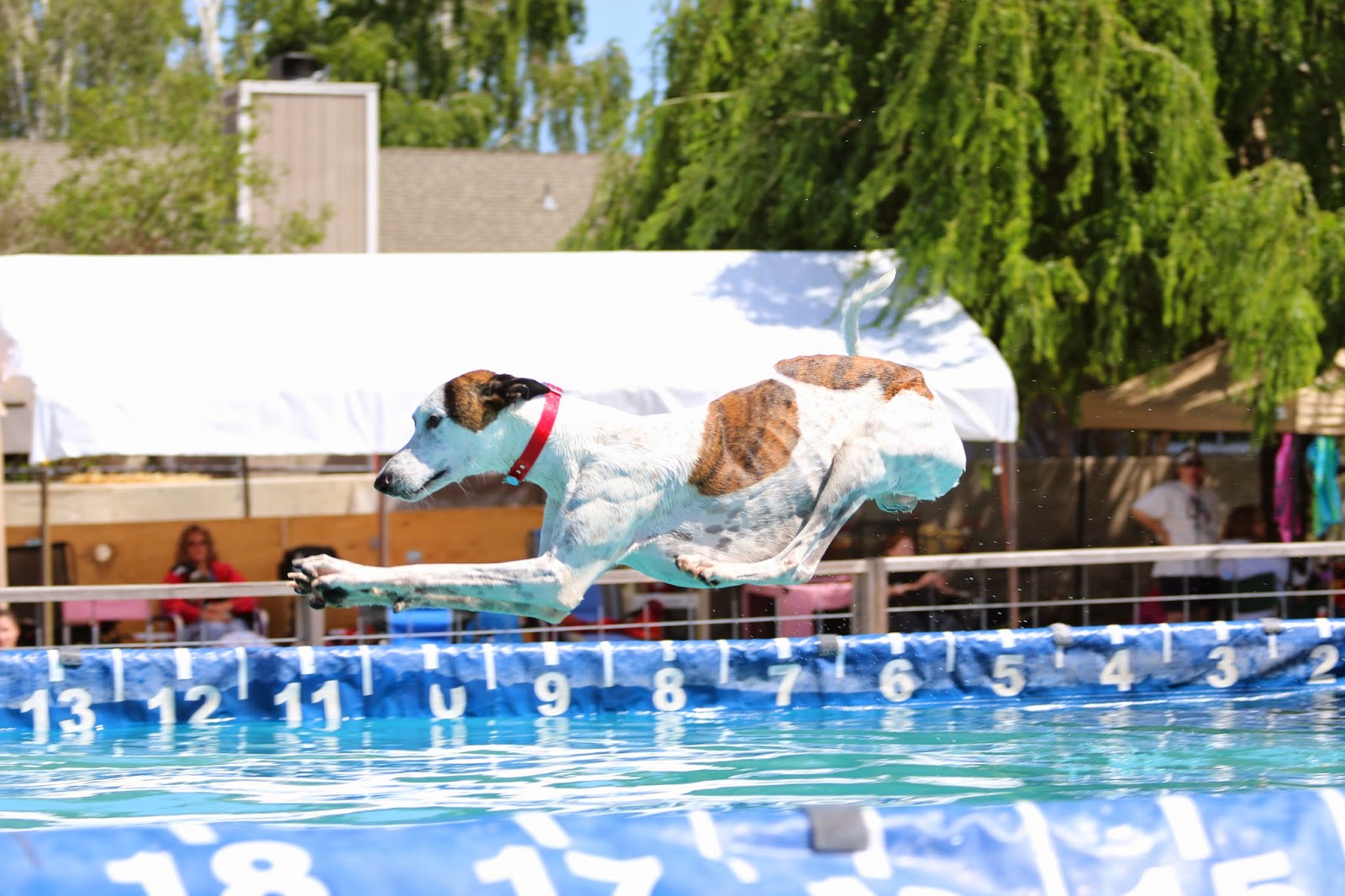 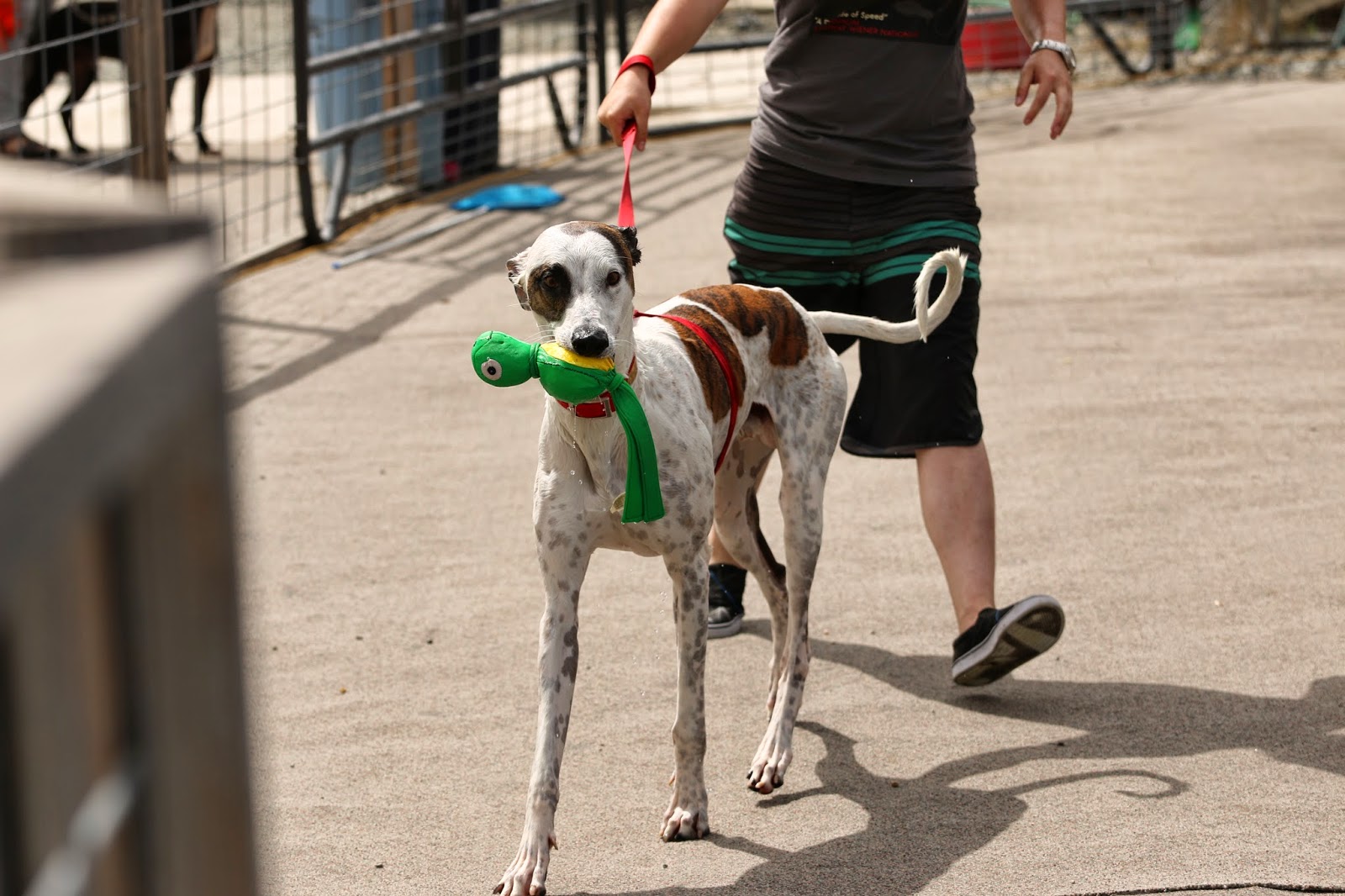 Posted by Stoutheartedhounds at 3:01 PM No comments:

No Puppies This Spring :-( 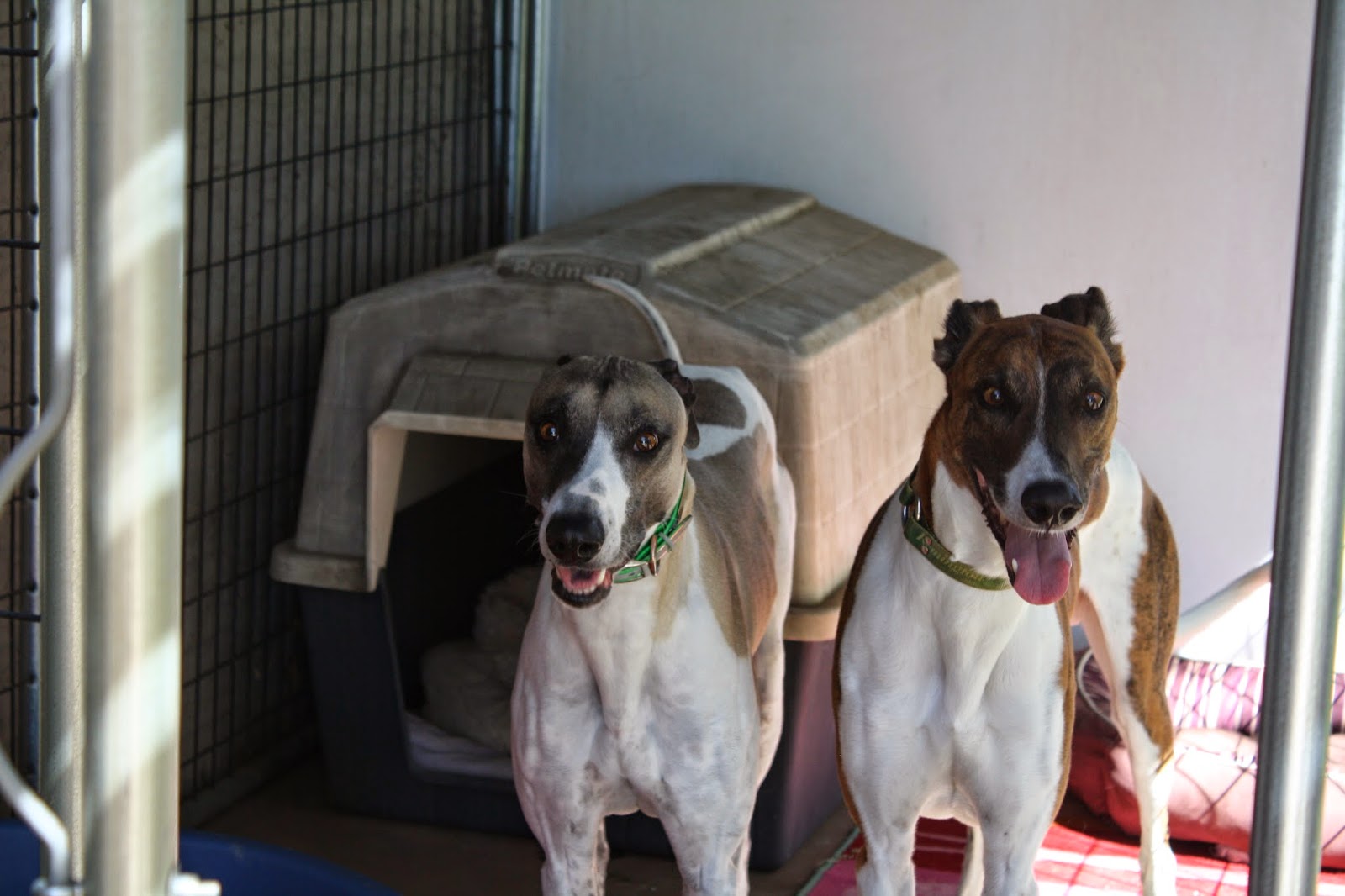 We took Luna to the vet for an ultrasound yesterday hoping to confirm a pregnancy. She was bred to Gil on March 14th and we were hoping to have a litter on the ground towards the end of May. Unfortunately it was not to be; the vet was unable to find any puppies, and we were understandably disappointed. The vet suggested that we do a complete thyroid panel and cultures on Luna to make sure there's nothing wrong on that end. Given her age, and the fact that she's a virgin bitch, we may have to use a more invasive breeding method next time around.
Posted by Stoutheartedhounds at 9:52 AM No comments: 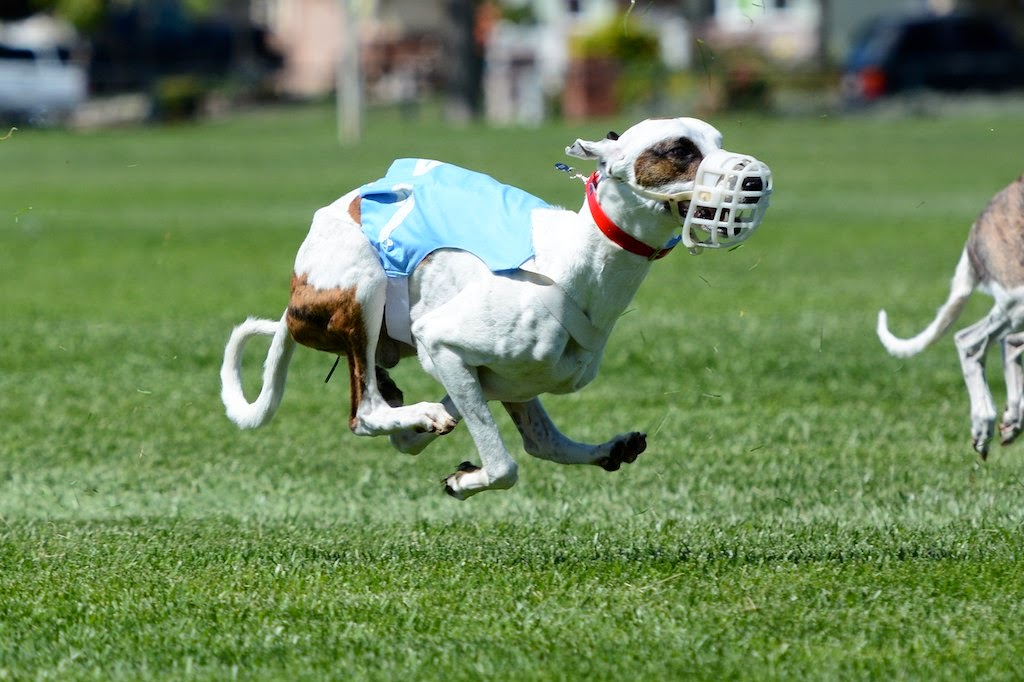 Every spring, our little racing club (Racing and Coursing Enthusiasts "RACE") hosts a weekend of all breed sprint racing. This year's spring meet was actually the first time since the Grand Course that Pi and Gil would be competing in any kind of running event. Although Pi came out of the accident unscathed, Gil's right arm had taken a bit of beating, particularly his wrist joint. Over the preceding weeks the inflammation had gone down, along with his lameness, but the joint was left with some permanent and noticeable calcification. I considered leaving him out of the race meet, but considering his age (he's going to be 7 years old in June) and the fact that his most competitive years are pretty much over, and his total lack of pain or tenderness in the joint, I could not justify keeping him from doing what he loves most. I decided that if he came up lame again the worst that could happen would be scratching him from the rest of the meet, and if he stayed sound I would continue to let him run and he would be a very happy puppy. 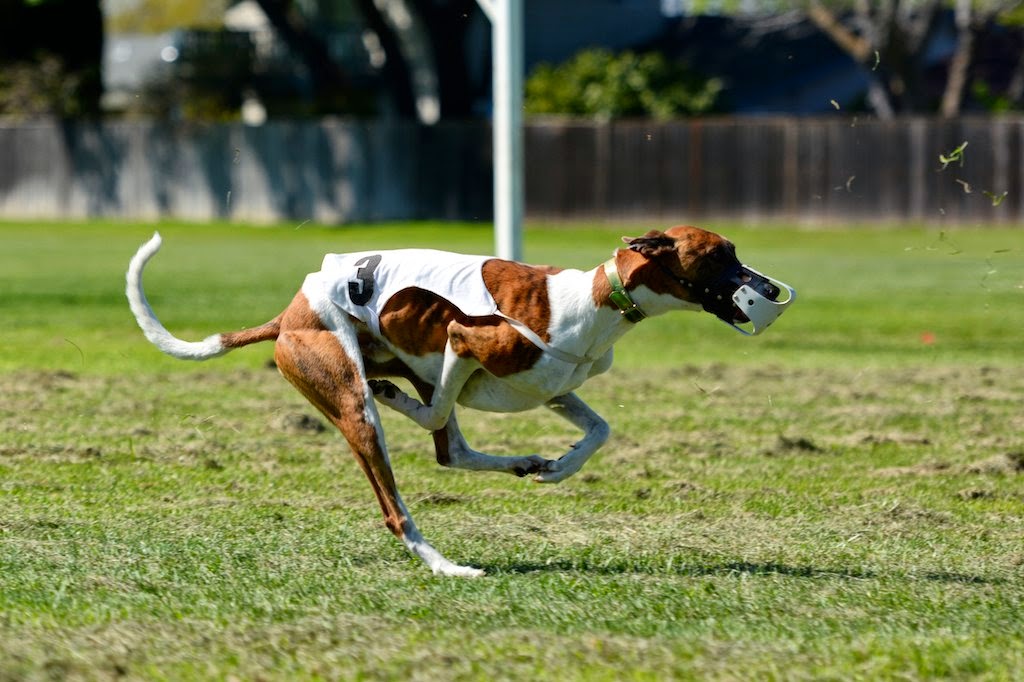 As it turned out, Gil ran soundly the entire weekend and doesn't seem to have slowed down at all despite being the oldest dog still competing. While his wrist did swell up a tiny bit (barely noticeable), he did not present with any lameness at all so I allowed him to finish both meets on both days. I wrapped his foot and wrist with elastikon tape just to give it a little bit of support, and to cut down on any swelling. I don't know how effective it actually was, but it didn't hurt. 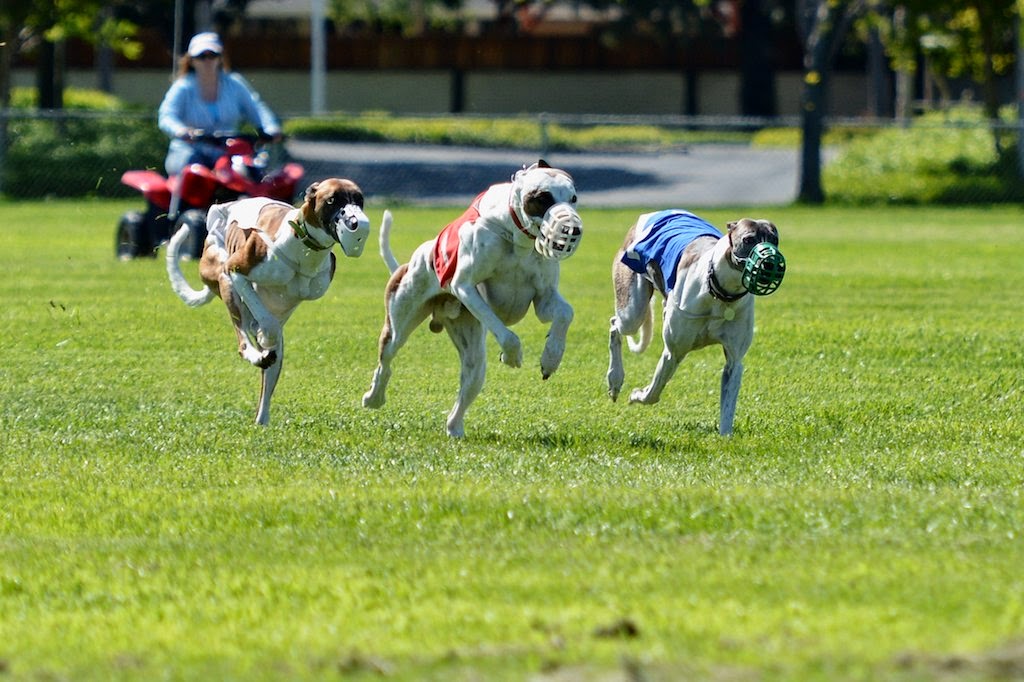 Gil in white, Pi in red, and Gator in blue
Photo by Steve Tradewell

The first day's meet was a match between the three big boys, Gator, Gil, and Baby Pi; and Dude was entered in singles. With Luna possibly in whelp we decided it was best for her to sit this one out (much to her distress). Pi finished second in the first two programs, then went on to finish first in the final program. This secured his spot at the top and earned him his very first High Score in Meet award! 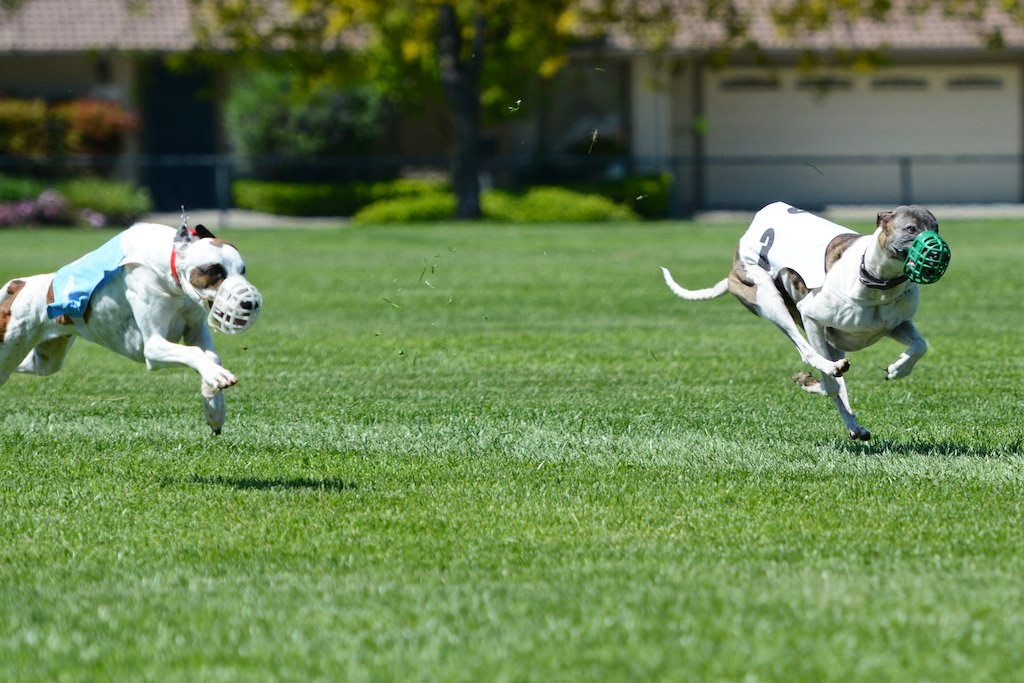 Pi in blue, Gator in white
Photo by Steve Tradwell 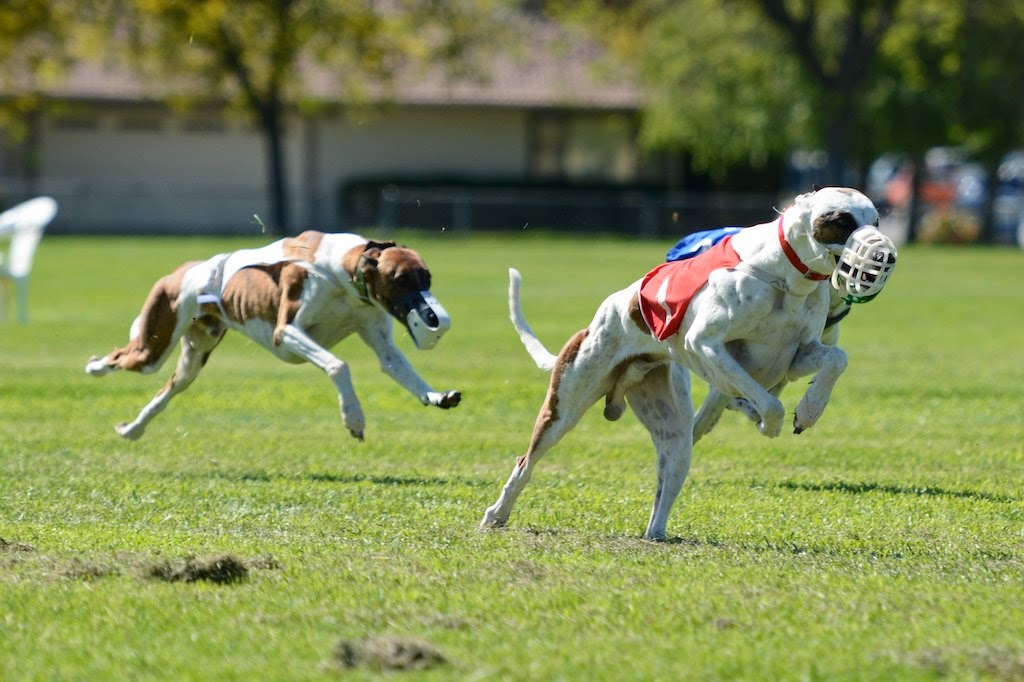 Pi pulling ahead for the win!
Photo by Steve Tradewell

Gator came in a close second in the meet, and Gil a close third. Dude ran some very fast singles races, with a best time of 12.58 and an average of 12.78. His times were only bested by the whippets, which is great considering that whippets were made for sprint racing! 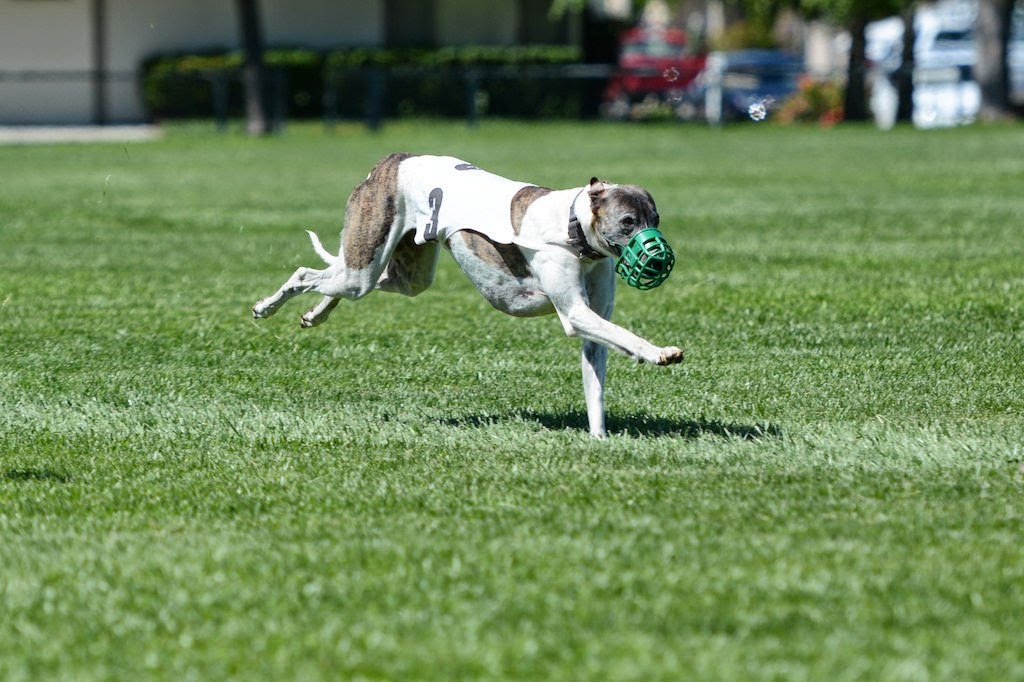 The next day was just Gil and Pi running in the regular stakes, and Dude running in singles. Either Pi was having an off day or Gil had decided that he wasn't going to let his only son beat him a second time, because Gil won the meet with a perfect score and a significant lead in every program. I was extremely pleased, not only that he won against a far younger dog, but that he finished so strongly all weekend despite his recent injury. Dude also had a better day running in the singles stake with a best time of 11.4, only a tenth of a second slower than Hattie's slowest run (and Hattie is one fast Greyhound)! 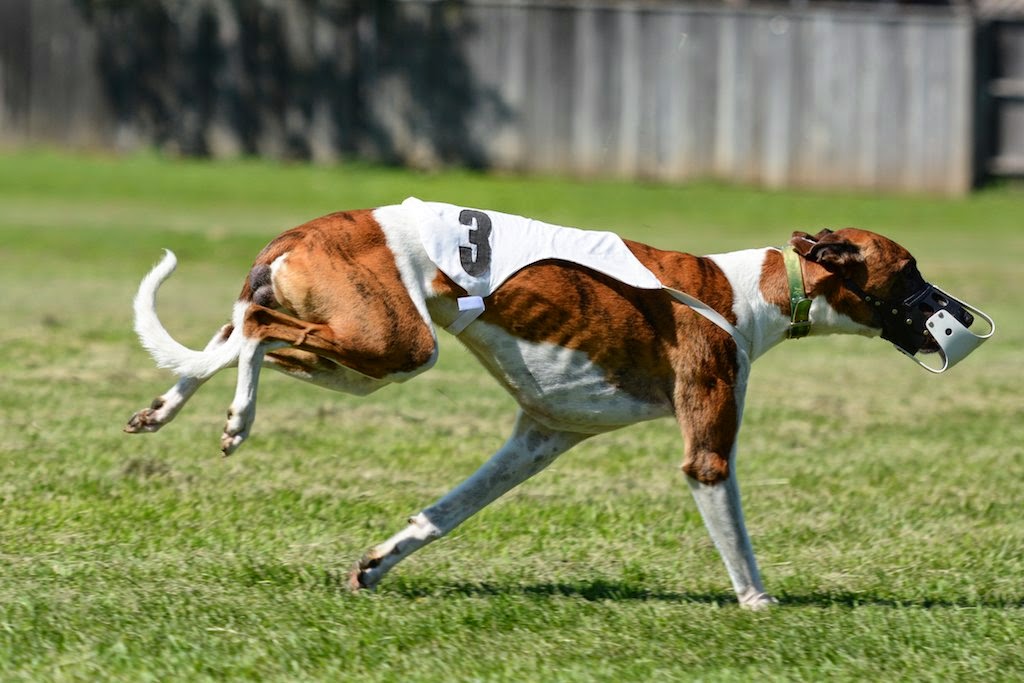 Gil coming into the finish, and coming down hard on that right wrist with no issue,
Photo by Steve Tradewell

Overall it was a great weekend, and a great start to the 2014 racing season. We look forward to more weekends of racing and lure coursing before we take a break for the summer. 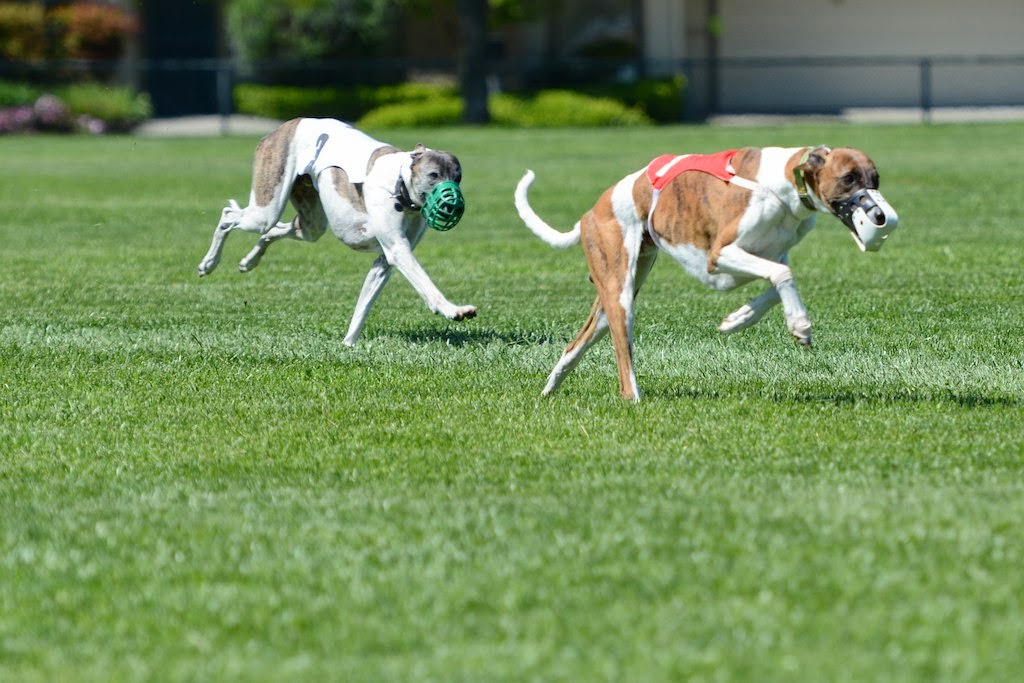 Gil in red, Gator in white
Photo by Steve Tradewell
Posted by Stoutheartedhounds at 2:46 PM No comments:

Stripey Dogs in the Snow

Gypsy and Bukky are still enjoying a winter wonderland up in California's Sierra Nevada mountains. 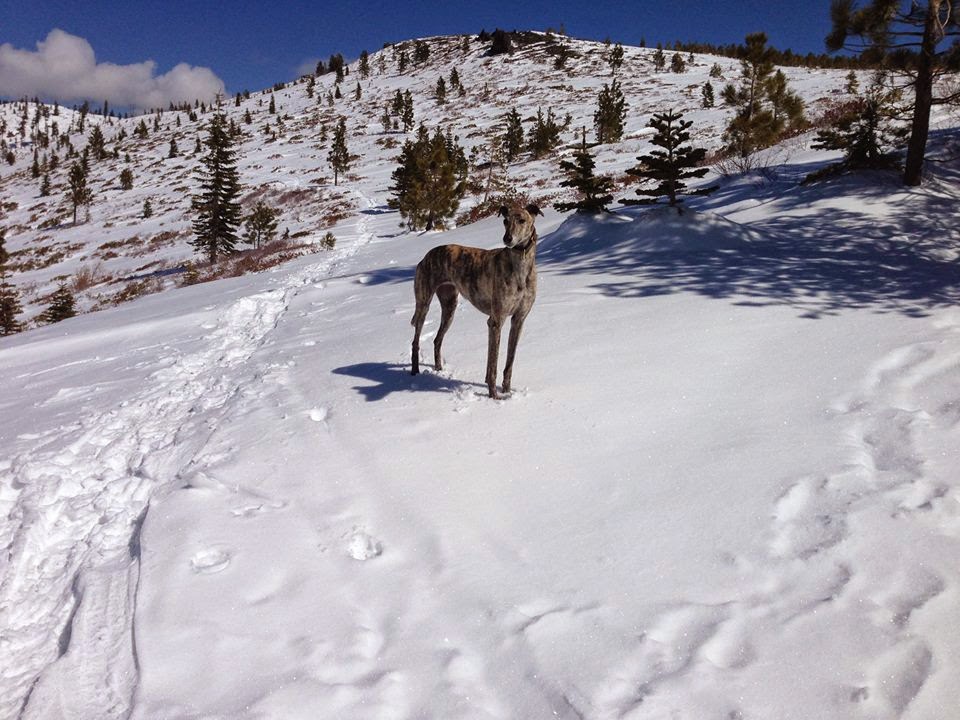 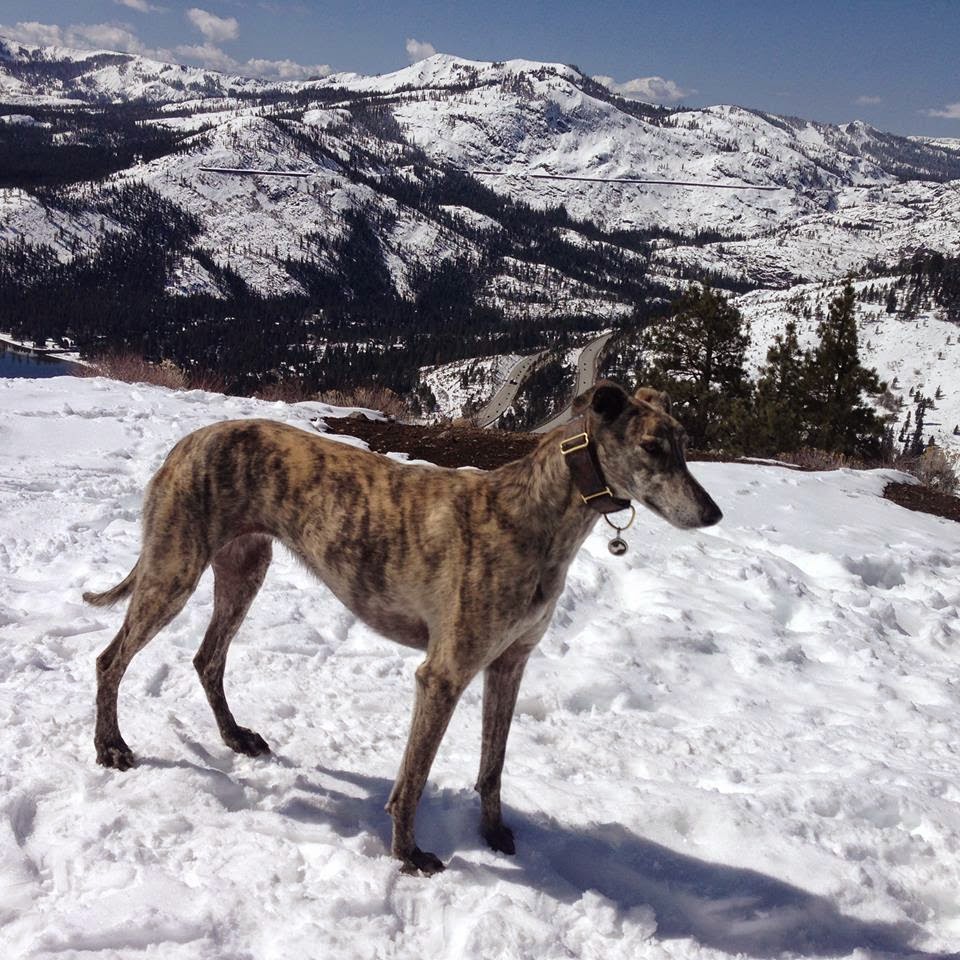 Posted by Stoutheartedhounds at 9:41 PM No comments: