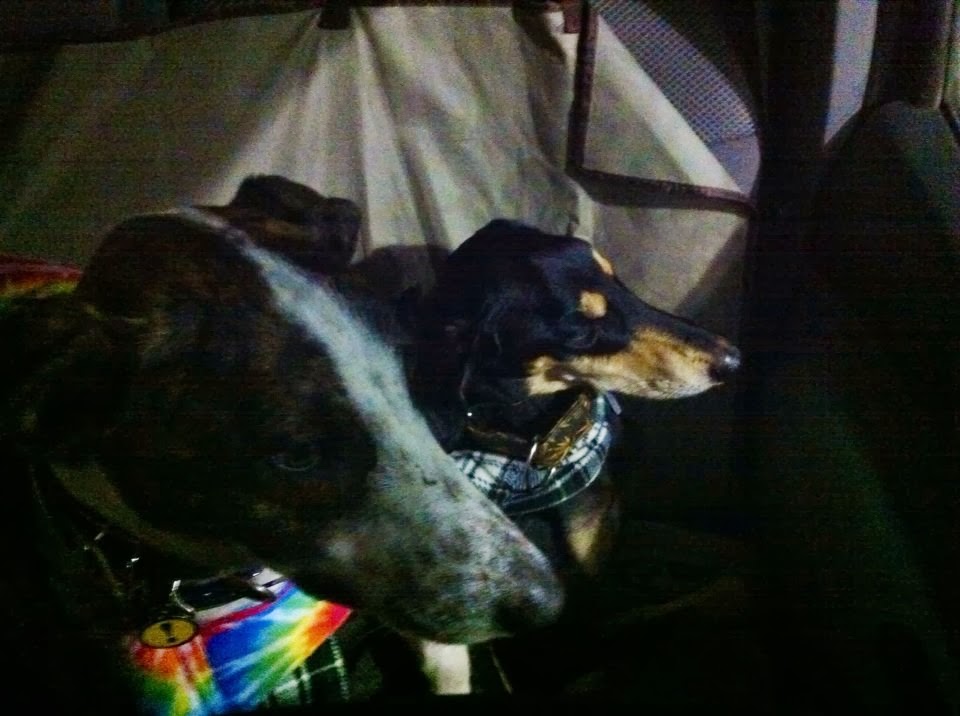 On Saturday, January 4th, I headed down with Hattie greyhound to attend a NOFCA mixed hunt. Hattie only needed a handful of points to qualify for the Grand Course, and Peshamba was already entered, so I looked forward to spending a day in the field with two of my girls.

Our field had 12 hounds, so that made for 4 prelim courses. Hattie drew the second course and Peshamba drew the third course, along with her kennel mate, Bukra the Saluki. We were also joined by another one of Pesh's kennel mates, Zealand the APBT (he decided he didn't like staying home alone, lol). It's not often that Peshamba gets to run in a mixed hunt, let alone with two of her housemates :-) 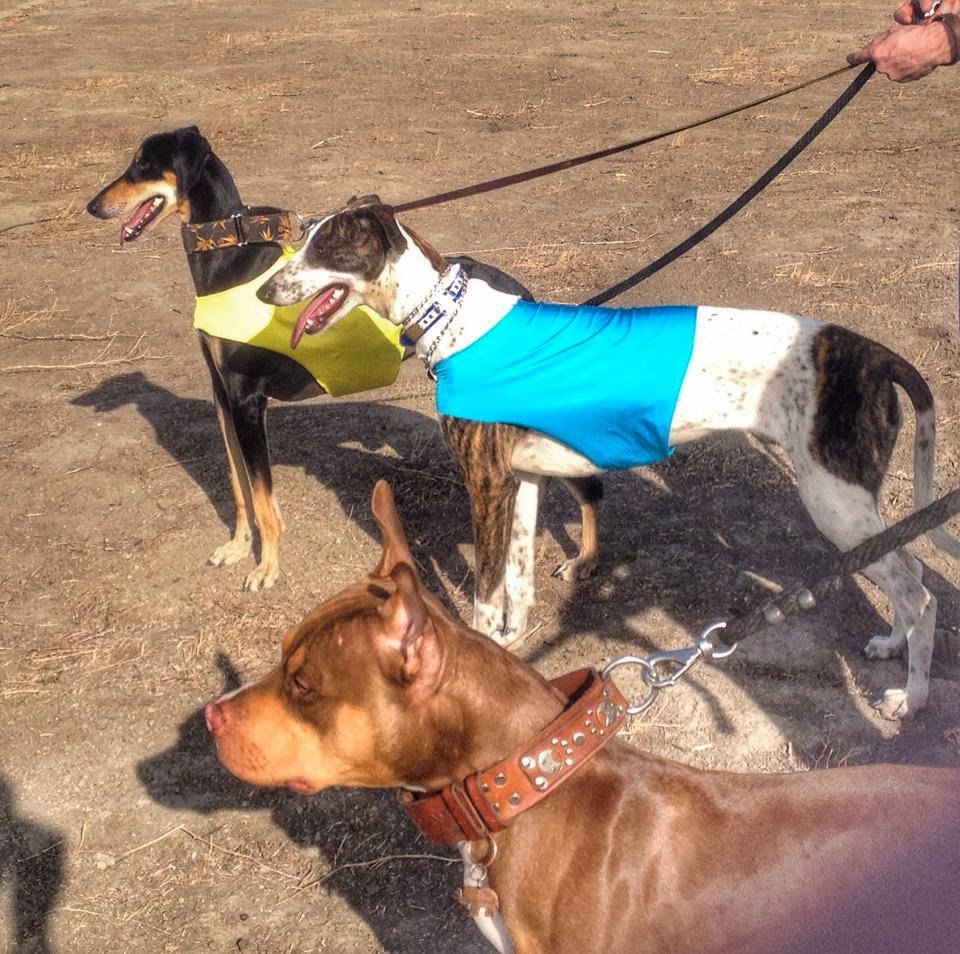 We were only able to run two rabbits in the field we started in. The first course got a nice hare, but unfortunately it ended up being mostly a tail-chase from what we could see. We walked for at least another hour before we got the second course off. The hare broke very close, off to the right, giving Hattie an advantage since she drew the blue blanket. She was off like a rocket, and quickly put a hard turn on the rabbit. She attempted to pick it up, but the rabbit ducked into a small gully, narrowly missing her jaws. After that, it was basically a tail chase with the other two dogs eventually passing Hattie as she ran out of gas. 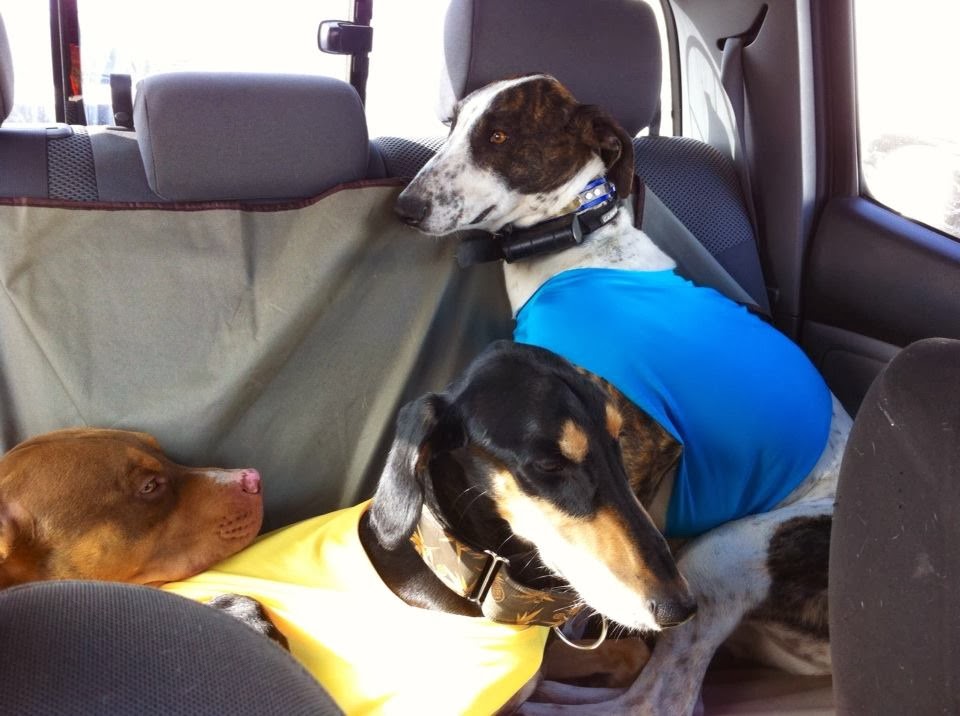 On our way to another field, and hopefully more rabbits!
Photo by Jairi Rai

As soon as we arrived, we got started quickly so as not to waste any more daylight. We only walked for about ten or fifteen minutes before we got the next rabbit up. Unfortunately it broke quite far ahead of us, so only one dog was sighted coming out of slips. Bukra ran straight after the hare, while the other dog ran in the opposite direction. Not being sighted herself, she had a choice between following her kennel mate or following a dog she didn't know. She made the right call and shot off after Bukra. She eventually caught up to him, but by that time they both went out of our sight. We were certain that it would end up being a no-course, but the judge had her binoculars up and the dogs did not return to the gallery right away. According to the judge, Bukra put one turn on the hare, but Pesh was never able to overtake him -- though she tried very hard. It was disappointing for all of us, but we had to move on if we wanted to finish on time.

The last prelim did not fare much better. We walked a short distance from where we had gotten the last course off, when we saw a small little brown thing sprinting with all it's might across a wide open section of the field. At first I thought it was a cottontail because it was quite small, and it had it's ears down. When it finally raised it's ears for a split second I knew it was a jackrabbit and the huntmaster called a tally-ho. The three dogs ran after it, but were never able to really get close enough to work it. With that, we finished prelims and moved on to finals. 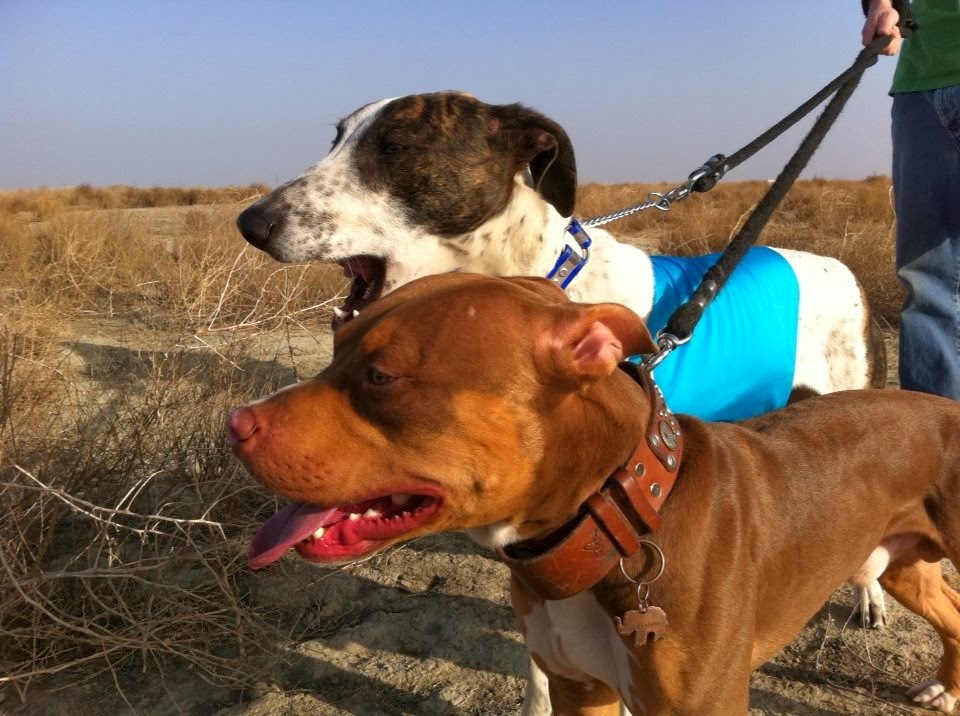 Pesh and her bro, Zealand
Photo by Jairi Rai

The first finals course was a trio of Salukis. The rabbit broke in front of them, not too far out and all three dogs took off after it. Bukra was leading until one of the other dogs collided with him, throwing him off course a bit, but he recovered quickly. The dogs were soon out of our sight, and came back a short time later. It was looking like most of the courses that day were going to end up being tail-chases, as we put up the last final of the day.

The second finals course was a "speed course" with two whippets and Hattie greyhound. The rabbit broke right under Zealand and ran parallel to the gallery. Hattie was not sighted at the time, but I slipped her anyway, hoping that she would follow the other two dogs and eventually get sighted. She was looking at the other dogs as she ran out of slips when the rabbit suddenly cut right in front of her into the wide open. As soon as she saw it she really put on the speed and led the rest of the way out. Just as the hare was about to reach the safety of a patch of cover, she put a good turn on it, ran up alongside it and picked it up! 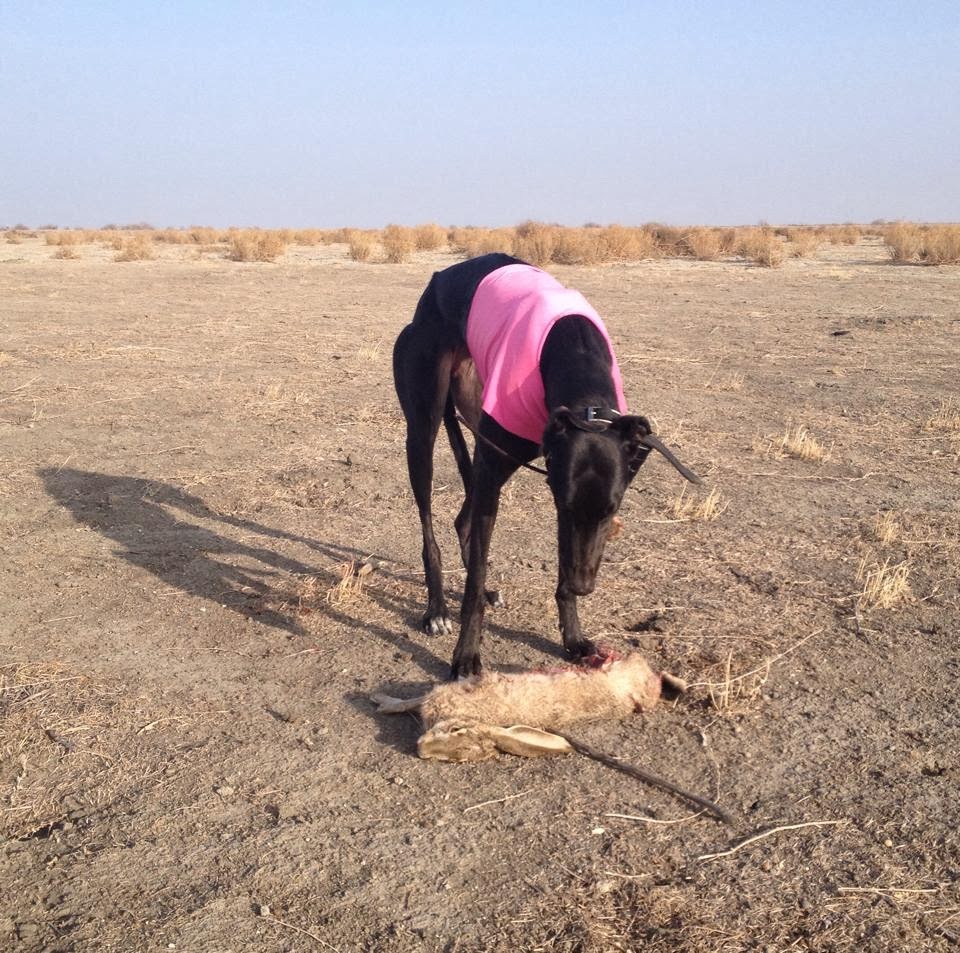 Hattie with her catch
In the end, Hattie placed 1st in the hunt and Bukra placed 3rd/4th. Poor Pesh didn't get a chance to run a second time, but she had a fun day and was thoroughly pooped. Hopefully she will have better luck next time!
Posted by Stoutheartedhounds at 9:49 AM No comments: