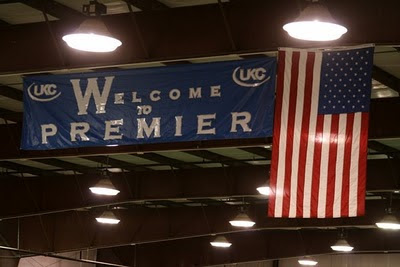 Since we didn't make the finals for Top Ten, we were only scheduled for a regular conformation show and terrier racing on the second day of Premier.

Our conformation judge this day was Nina Marie Sherrer. I was glad that up until this point every judge we showed under was unfamiliar to me. There were a number of judges present that we had already showed under back home and I was eager to show off the MAs to new faces. Ms. Sherrer was a thorough judge and gave every dog her undivided attention when it was their turn to show. 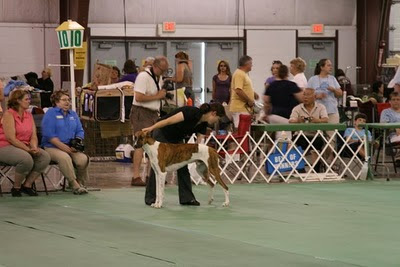 Fecni showed much better than she had in Top Ten (she was moving very well) and I really thought the judge was going to pick her for breed but Gil won out again. After breed judging was over we had a few hours before the group schedule would be announced and terrier racing wasn't going to start until 5:00 so we decided to crash in the RV for a little bit.

After a brief nap our uncle Alan and aunt Cheryl arrived. Both are dog lovers so they were eager to see what we were doing. By that time the group schedule had been posted and the sighthounds were scheduled to be judged first promptly at 1:30 which only gave us about a half hour before show time. 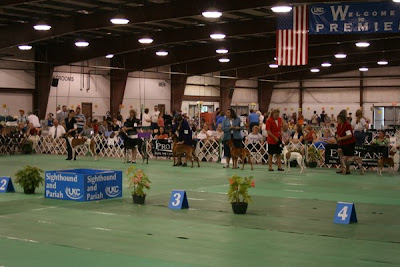 UKC did a lovely job setting up the group show rings; it felt just like being at Westminster. We were ordered into the ring by size/speed which put Gil and I up toward the front in back of the Borzoi. Ms. Sherrer was our group judge again and like she had done in breed she was very thorough in her judging. This was the largest group we had ever shown in so I was really hoping to make a placement. Gil showed well and was very jolly during the whole thing. After the judge was done going over all the dogs she went down the line and picked out dogs for her short list. To my delight she pointed at Gil and I took a spot behind the Deerhound. I was certain we had made a placement until I saw that she had pulled more dogs than there were ribbons for. After going over her short list she reshuffled us and unfortunately we did not place. Still, it was wonderful to have made the short list and I was delighted that the Greyhound was given a group 1. Greyhounds so seldom take top honors like that.

We hurried back to put Gil back in the RV and get the little ones out for the races. Alan and Cheryl were really excited to watch the races and they were definitely not disappointed. To our very great surprise, Beryl ran the best races she has ever run in her life against some very strong competition and pulled off a third place in the flat races and a second place in steeple! Considering that she's usually dead last when she runs at home we were beyond ecstatic. I believe she actually earned her first points towards her racing titles. 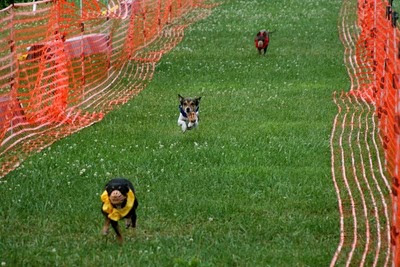 Bandit dominated the dachshund races as usual and took home some beautiful ribbons, much to the delight of his owner. Even though he's slower, Leeroy still ran with a lot of heart and did us all proud. 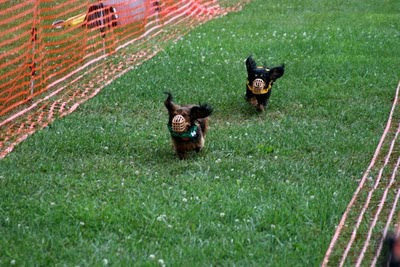 The races left us all thoroughly exhausted so we headed back to the RV for some much needed sleep before day three ...
Posted by Stoutheartedhounds at 3:37 PM