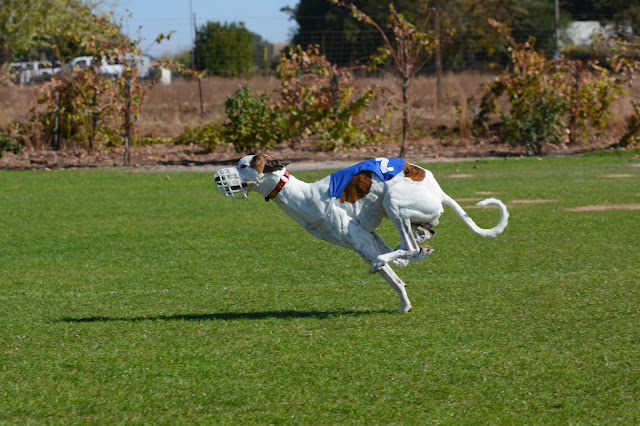 Pi on the move
Photo by Steve Tradewell

After the conformation show on Sunday, the dogs were more than ready for the final event of the weekend: sprint racing. We had six dogs entered; Gil, Gator, Pi, Luna, Peshamba, and Fecni. As I mentioned in my previous post, I decided to pull Gil from finals in the lure coursing trial, and I saved Pi completely for the race meet in hopes that it would improve their performance.

Unfortunately we didn't have starting boxes that are big enough to accommodate the Agars, so all had to be hand-slipped. Hand-slipping is a much less accurate way to get an even start on all the dogs, which can skew the results if all the dogs are evenly matched.

In the first program, Pi and Fecni were placed in the low point race, leaving the others to run in the high point. I knew Pi was faster than that, but his WAVE wasn't high enough at that time for him to draw higher. So, poor Fecni had to race against her much younger son. She ran about a third of the way down before she decided it wasn't worth the effort and trotted back to the start line. I had not intended to run her in all three programs anyway, so it wasn't a big deal. 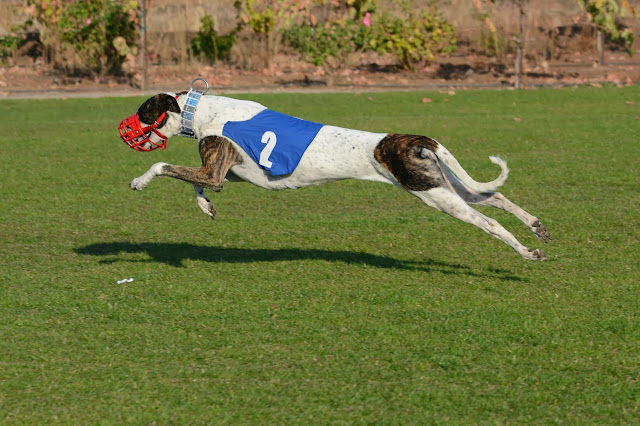 Pesh taking up the rear
Photo by Steve Tradewell

In the high point race, Gil and Gator were running neck and neck almost the entire way down, but Gil managed to win by a nose, with Luna and then Pesh taking up the rear. It's unusual for anyone to beat Gator in a race, so I didn't know whether Gil's first program win had to do with him getting an earlier slip or if Gator was just a bit fatigued from the lure coursing trial the day before. 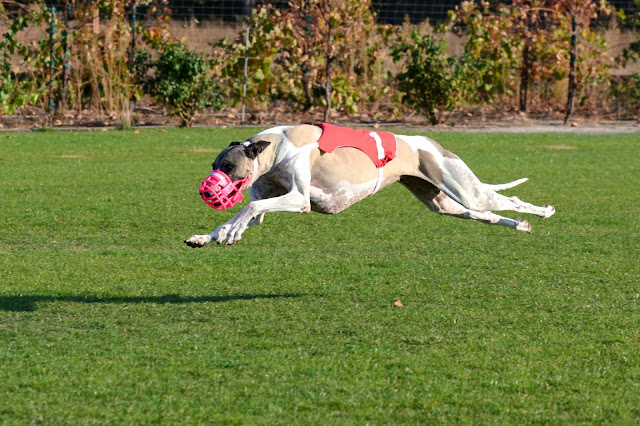 In the second program, with Fecni scratched, the two remaining girls were drawn in the low point and all the boys were drawn in the high point race. I was certain that Gil's win in the previous program had just been lucky, but he surprised me again by taking a clear lead and coming in first, followed by Gator and then Pi who were not too far apart from each other. 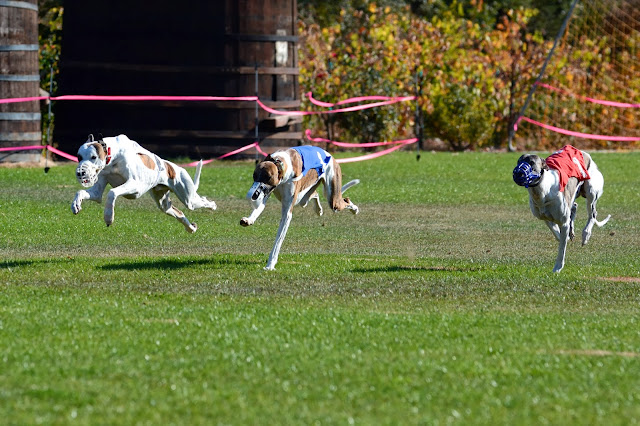 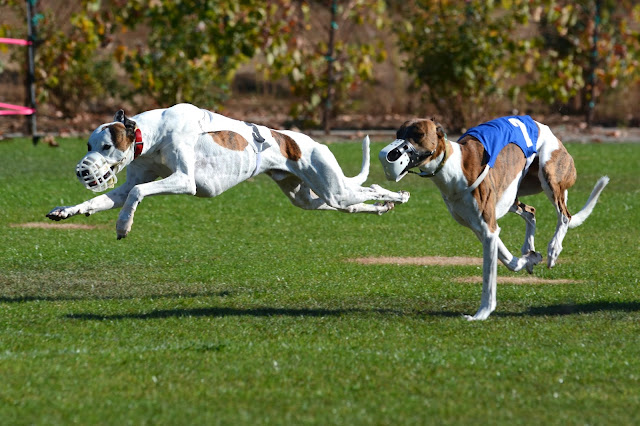 Pi and Gil racing to the finish
Photo by Steve Tradewell

Having won the first two programs, Gil pretty much had the meet in the bag, but even so both Tom and I were absolutely certain that Gator would turn on his after burners and win the final program. From my perspective at the finish line it looked like all three boys got an even slip, and were running head to head almost the entire way down. The last five or so yards of the race was quite a nail-biter; Gil and Gator were running evenly, when Gil made a small surge ahead, managing to squeak ahead by what looked like mere inches. It was so close that I wasn't sure if his little burst of speed came too late or not. In any case, even if Gil came in second place in the final program that would still be enough for him to win the meet. I was so surprised I just couldn't believe it. 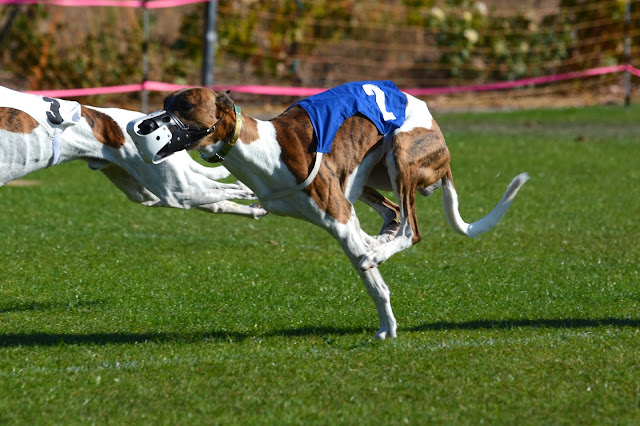 After walking all the dogs out and examining them for injuries, I made my way over to the scoreboard to get the final results and was pleasantly surprised to see that the judges recorded him as having won the third program! It should be mentioned that Gil is six years old, two years older than Gator, and he was the oldest dog competing that finished all three programs. He has not won a race meet of this size in several years, and even if the win was influenced by Gator's participation in the lure coursing trial the day before, it was still a very special win for him and for me. 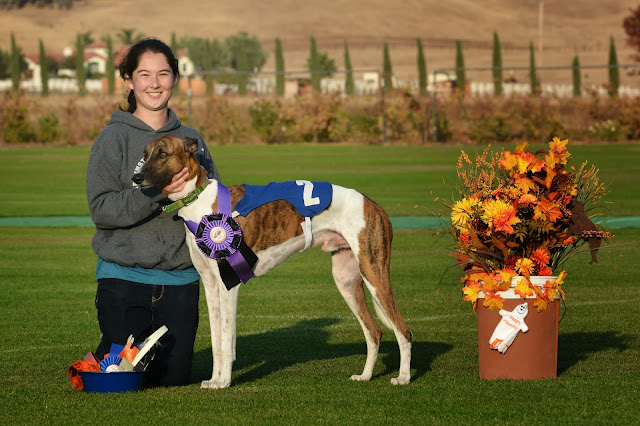 Just to keep everything in the family, Gil's daughter Pesh proudly took home the Turtle Award, given to the lowest scoring dog who finishes all three programs. Pesh may not be the fastest Agar around, but she certainly is not lacking in drive or enthusiasm! I think she's going to be more of an endurance runner than a speed demon. 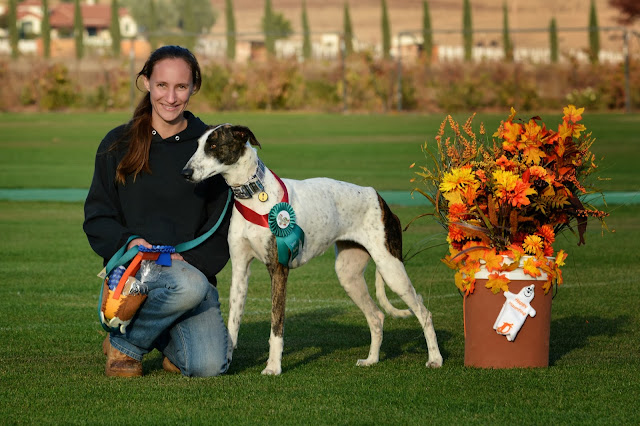 Posted by Stoutheartedhounds at 8:40 PM