The Western Washington Whippet Association hosted three days of racing, lure coursing and a sighthound fun match over Memorial Day weekend. We have been meaning to travel up the PNW to do some PR work for the Magyar Agars for a long time now, so we finally decided to make the versatility weekend our debut so we could highlight the breed's athletic prowess to a new audience.

It takes about 12 hours to drive from Sacramento to Olympia, WA. Unfortunately I had jury duty obligations on Tuesday that could not be postponed, so we knew we'd be making a long trip back home on Monday. Thankfully however, we had the freedom to pace ourselves on the way up so we packed all our gear, the three MAs (Gator, Luna and Fecni) and the token dachshund, Leeroy, into the van and began our journey to Ashland, Oregon on Thursday afternoon. 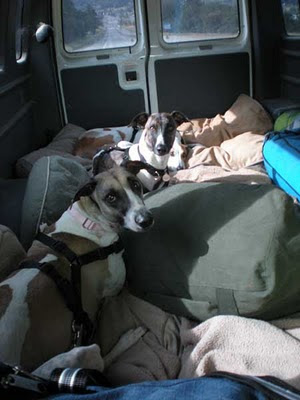 Ashland is almost halfway between Sacramento and Olympia, and we made very good time despite periods of heavy rain. We stopped off at Shasta to meet up with one of Tom's geology colleagues. The temperature had dropped noticeably since leaving the Sacramento valley, but being the tough dogs that they are the MAs weren't phased a bit. 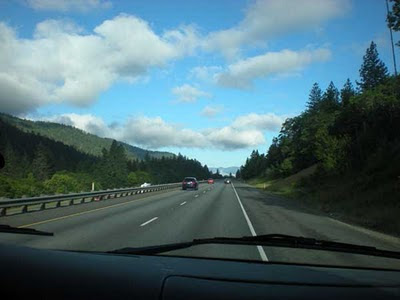 The scenery on the way up the states was absolutely breath-taking, and only got better as we moved along. There's definitely no shortage of wide open spaces and greenery in Oregon!

We reached Ashland by early evening and checked into our hotel before heading out to grab some dinner. After settling everyone into their respective rooms it wasn't long before we drifted off to sleep for the night. It's been a long time since I've stayed in anything nicer than a Motel 6, so the dogs and I definitely took advantage of the plush amenities in the hotel room. 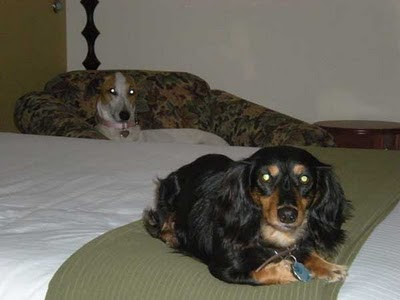 And so concluded our first day of travel. Stay tuned for the next installment of our trip.
Posted by Stoutheartedhounds at 9:15 PM