I'm going to jump out of chronological order, just for a minute, since I'm so behind on posts. I'm just so excited and pleased with Rietsu's first competitive coursing results that I had to share sooner rather than later. 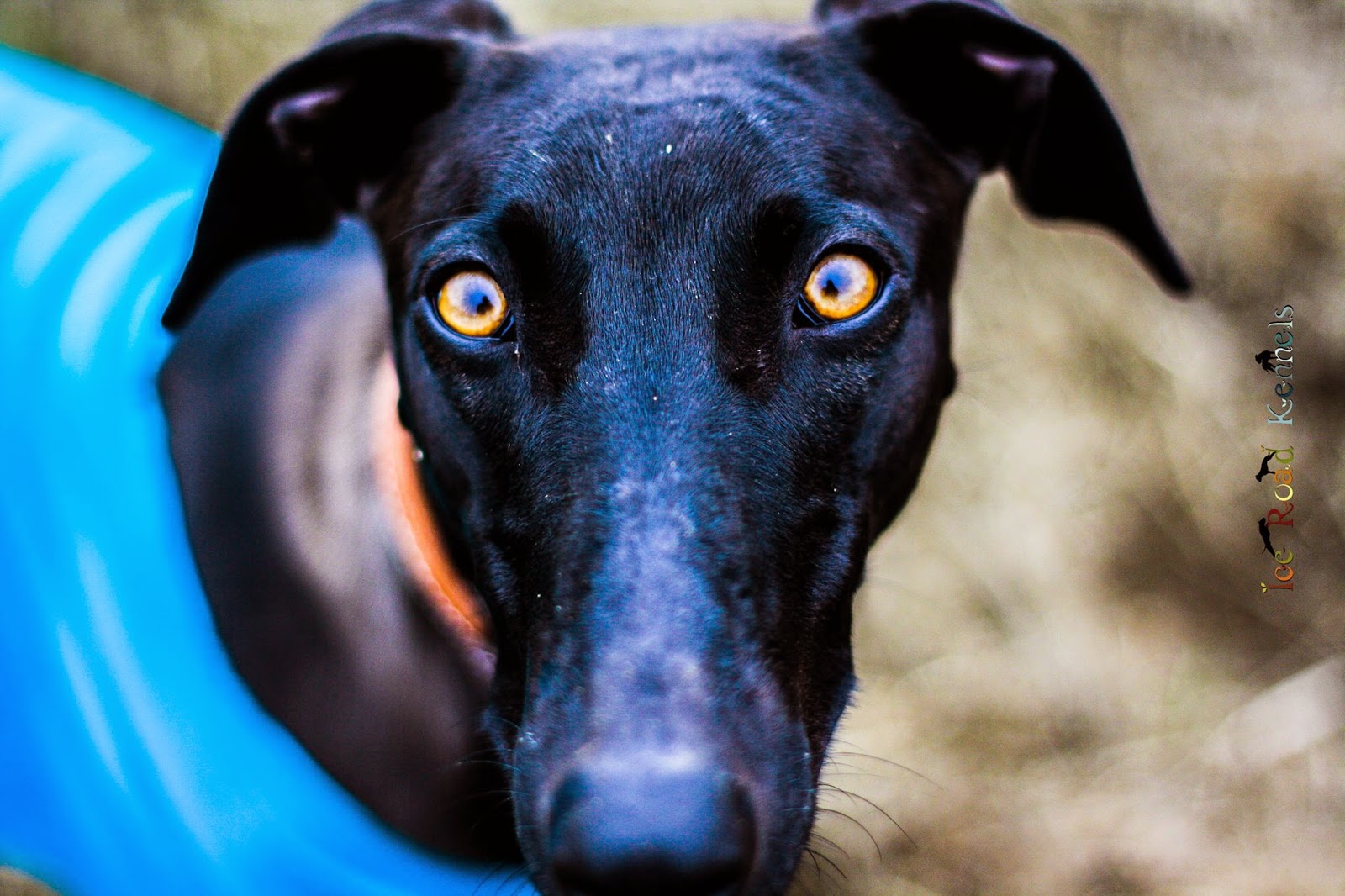 So, the CRA (California Rarebreed Association) had its second-to-last coursing meeting of the 2014/2015 season this past Sunday (1/18). The field that we used for this hunt had recently been drained of several feet of water that had been brought in following a big rain storm earlier this season. As such, the ground was still quite damp and muddy, but we managed to walk through it, and clearly some of the hare population had moved back in. 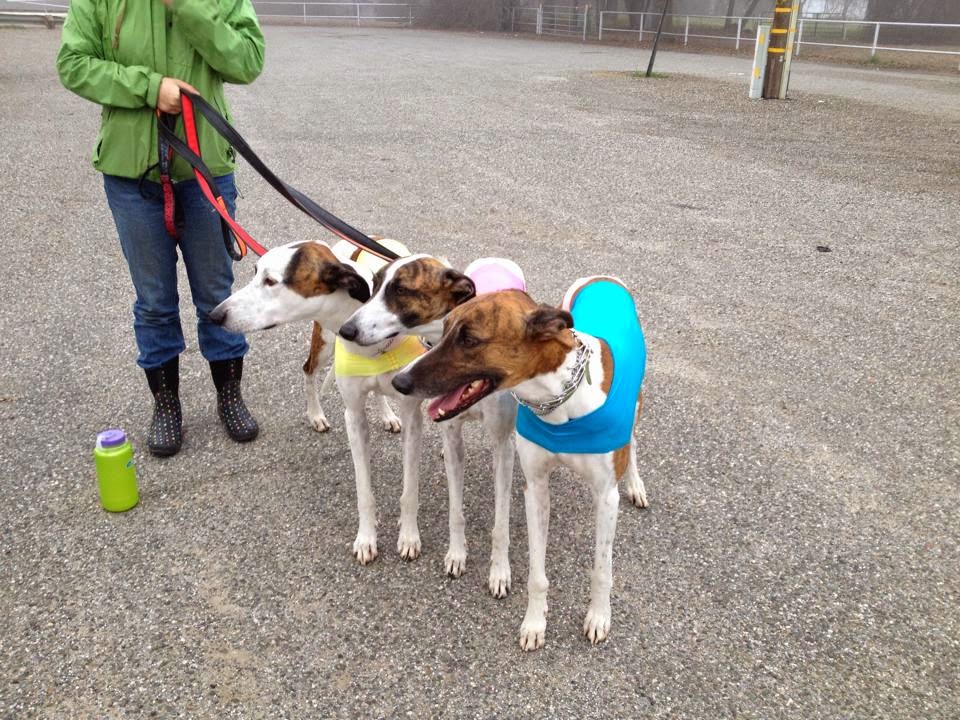 Waiting for the fog to lift

The biggest hang-up we had was the fog. We set roll call for 7am, but the fog was so thick we weren't able to enter the field until almost noon, and even then the visibility was bad. Still, we had to get going at some point or we wouldn't have any chance of getting done.

We had a decent sized entry for the day; 5 Silken Windhounds, 4 Magyar Agars, 1 Afghan Hound, and 1 Pharaoh Hound. Gil, Pi and Patti drew the last course all together, and Rietsu drew the third course along with the Afghan and the Pharaoh. 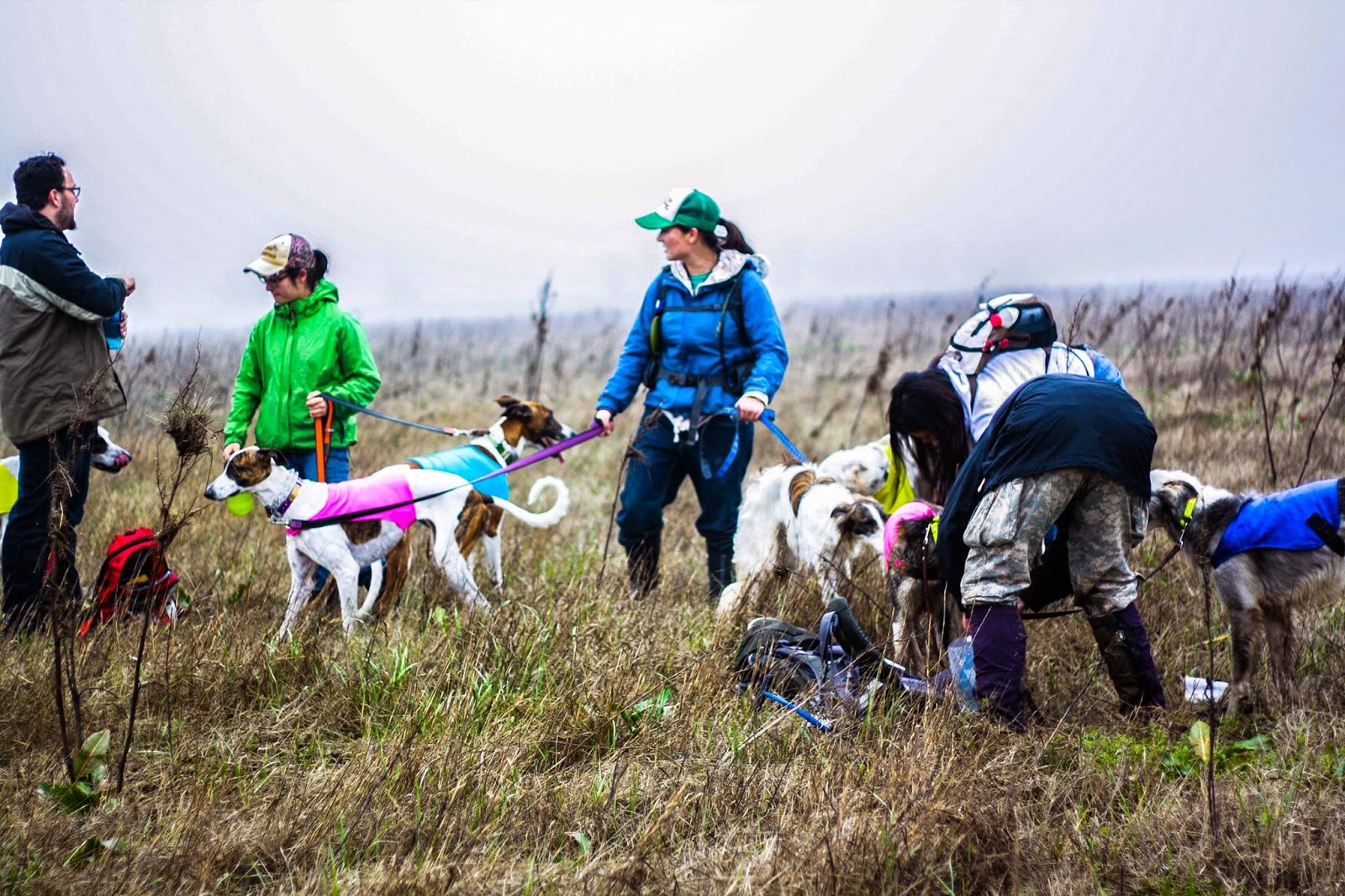 We got the first hare up pretty quickly upon entering the field, and the three Silkens that were running it had a nice decent-length course. We got a second hare up pretty quickly after the first, but it jumped from behind us and the dogs could not get sighted on it. Nevertheless, it was very encouraging to get so many hares up so quickly given that we got such a late start. 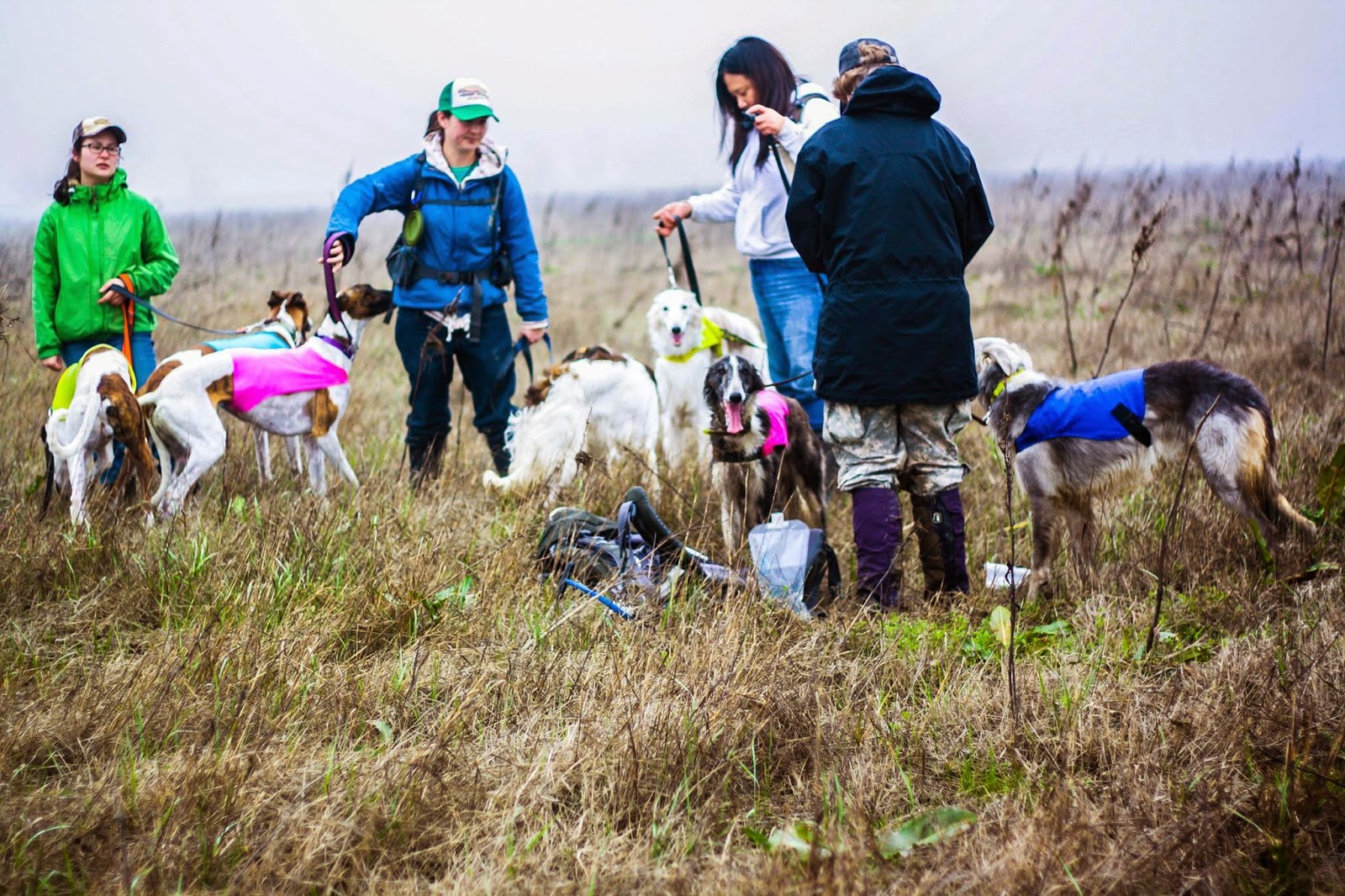 We finally got a third hare up for the second prelim course, but the rabbit jumped right at the base of the levee and immediately went up, down, and under a fence. Not much of a course, but enough for us to move on. At that point it was Rietsu's turn, and we suddenly had a hard time finding hares. 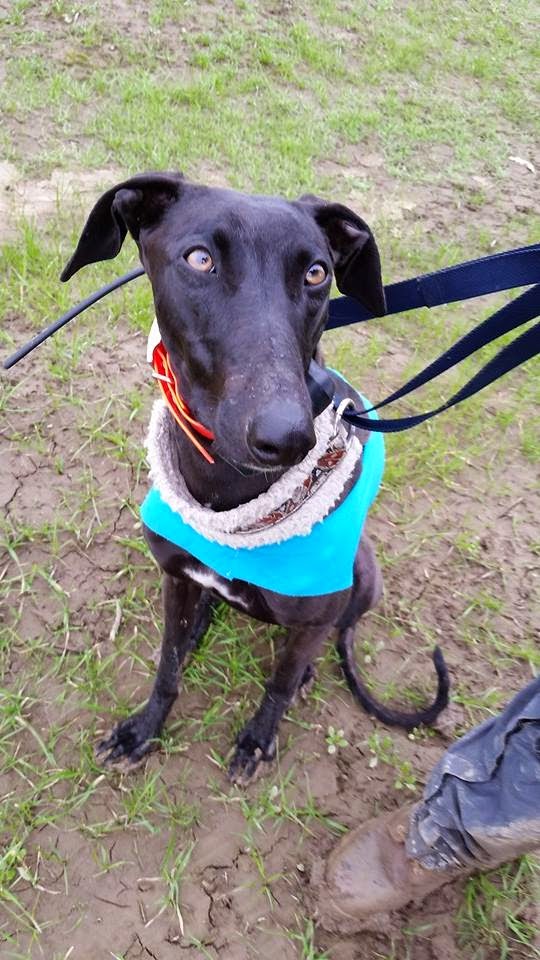 In slips and ready to go!

We had decided to cross from one side of the field to the other when we got the fourth hare up. It was a long call and the dogs became unsighted almost immediately, but to their great luck they popped another hare and took off after it! I could not see most of the course, but Rietsu was right up where the action was and running like she had been doing it her whole life. They ran for quite a ways, but she found her way back to the gallery without a hitch, and happy as a clam! 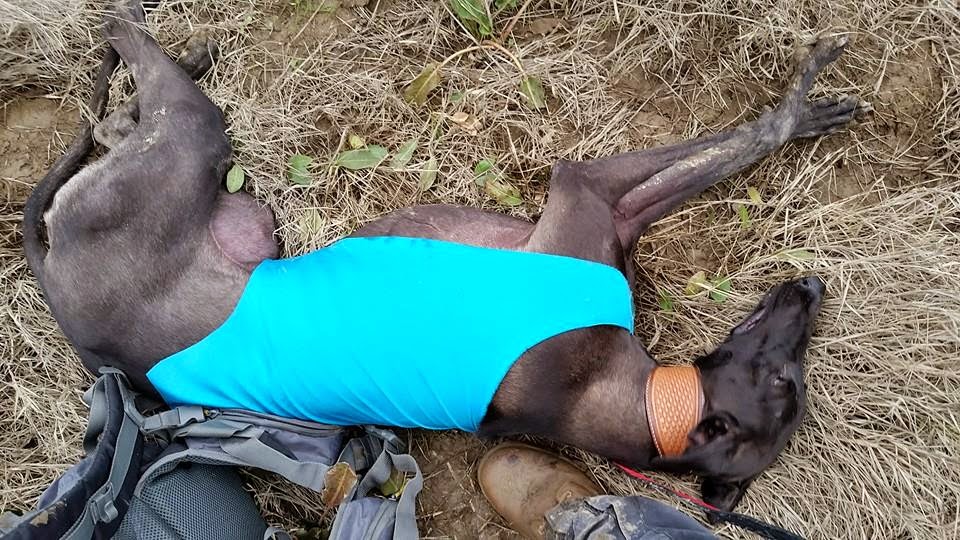 Rietsu after her run
She was tired!

As it turns out, that's where the excitement for the day ended. We put the last course up, and walked for hours without even seeing another hare. With the weather being so foggy, the day was getting darker at a much faster pace, and in the interest of finishing the hunt I decided to scratch my three and call it a day. 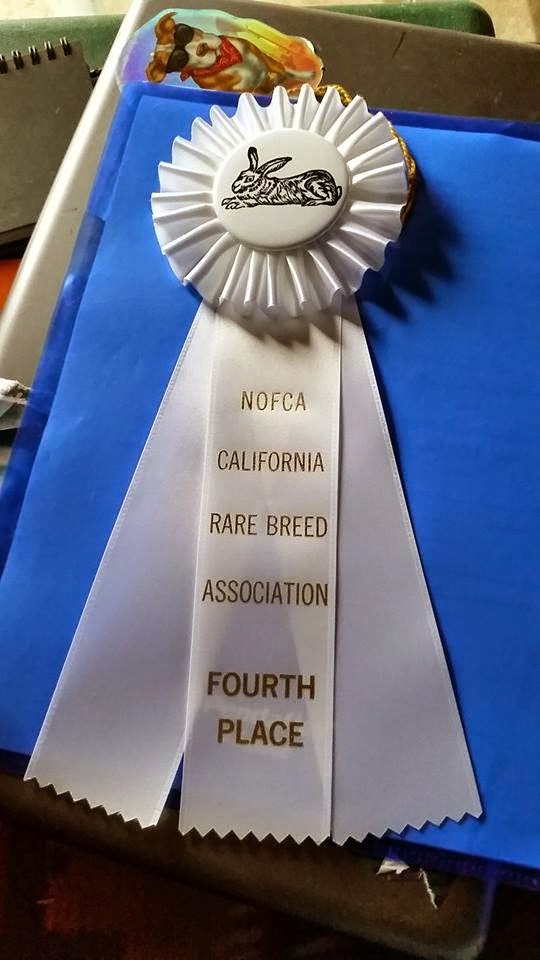 It was definitely disappointing that Gil/Pi/Patti didn't get to run, but Rietsu ended up with a 4th place overall, which definitely made up for it! So far, every one of our American Magyar Agars has earned points and placements at their very first hunts. We can't wait to run again next weekend!
Posted by Stoutheartedhounds at 10:16 PM