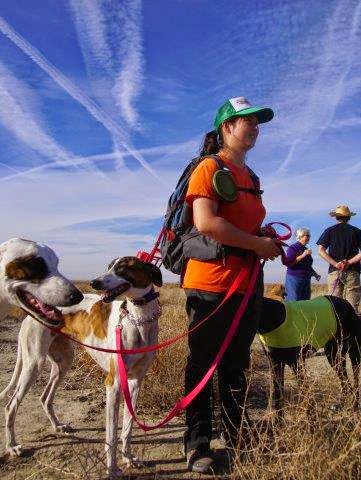 Pi, Patti, and Hattie in the gallery
Photo by Herb Wells

So, back in November, during Thanksgiving weekend, I took Pi, Patti, and Hattie down south for a weekend of coursing. Saturday was a CGCA Greyhound breed hunt for Hattie, and Sunday was the CGCA mixed hunt for the two Agars.

Saturday's Greyhound hunt was very productive. We had a hard time finding the first couple of rabbits, but then we hit the jackrabbit pocket and were popping more than one at a time. It was a warm, sunny day, and we finished on finals in the early afternoon. Hattie placed 5th overall, and the Agar twins had a good time working the gallery for us. 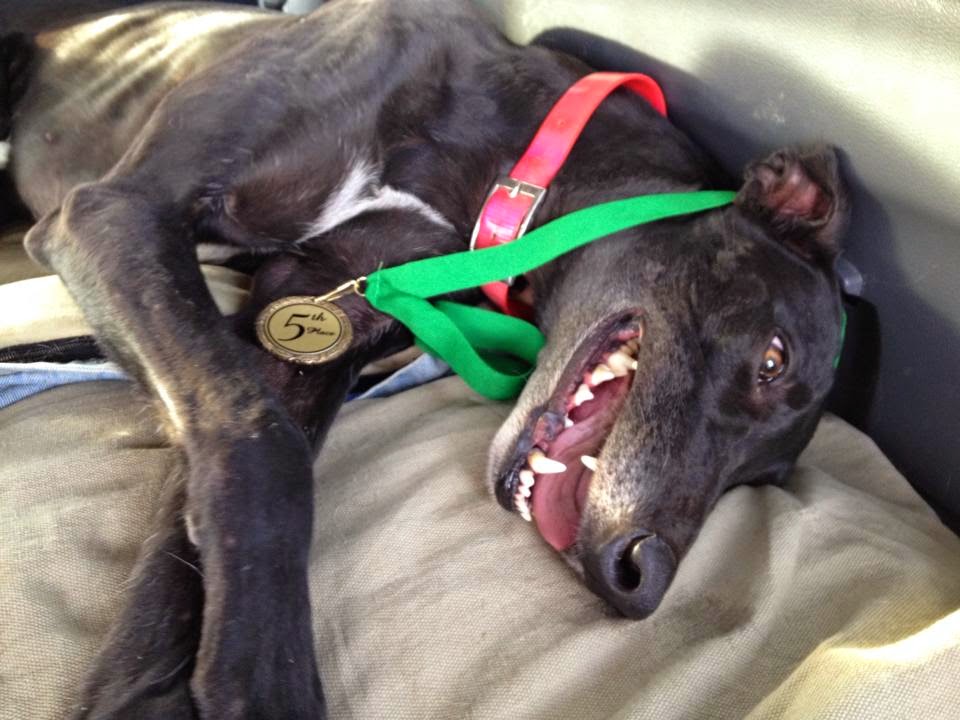 Hattie with her 5th Place medallion

The next day, the weather got much cooler with a lot of cloud cover. Our stake was sent to a field which I personally dislike hunting in, because it tends to be unproductive whenever I go there. But, I remained hopeful, and with the weather being on the cool side I was happy. 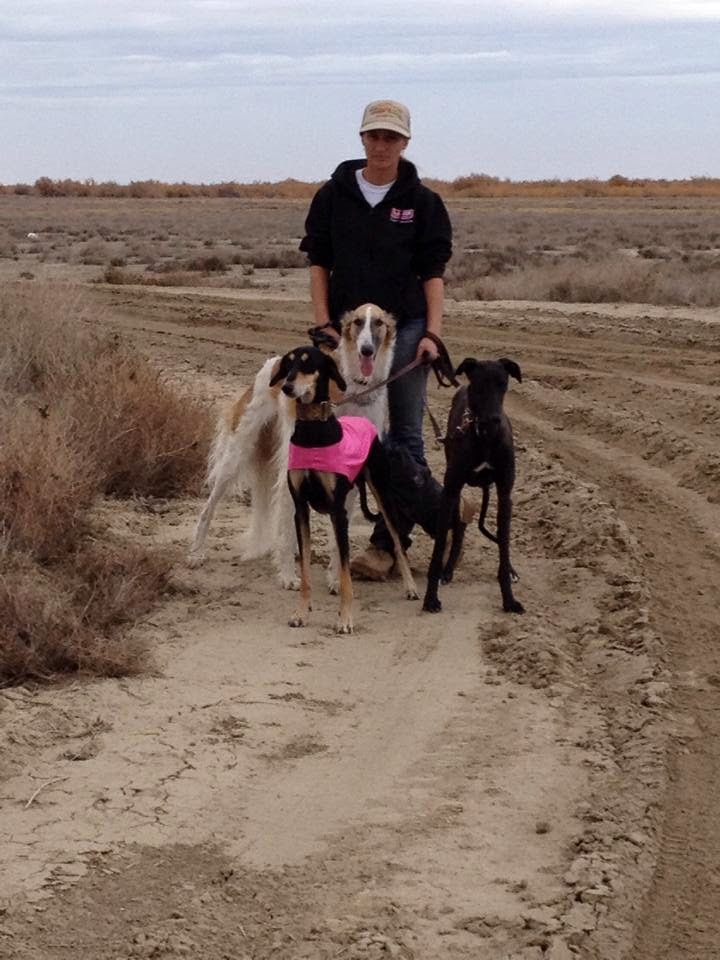 There were five prelim courses; Pi drew course three, and Patti drew course five. To my great surprise, we started finding rabbits almost immediately upon entering the field, and got one up about every hour.

Pi's rabbit came up on his side, the far right, and bolted through a patch of open where he could see it very clearly. He ran with two Salukis, including Rietsu's kennel-mate Bukra. I could not see most of the course, but Pi led for as long as I could see him and put at least one turn and a few wrenches on it before he got out of sight. He came back to the gallery, tired but very happy. 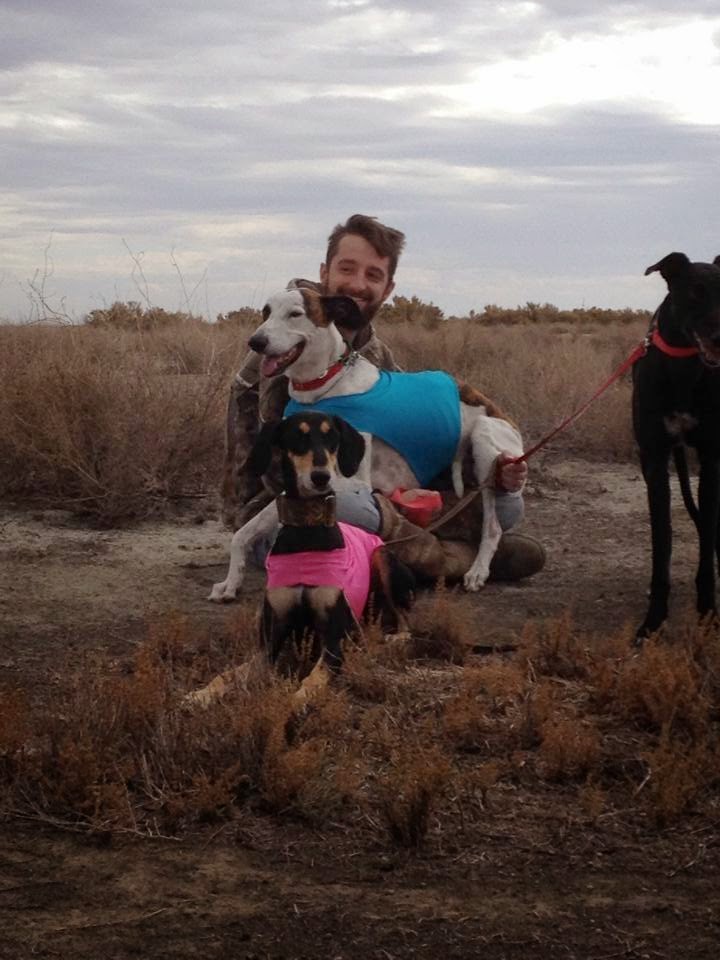 Pi hanging out with Glenn, Bukra, and Hattie

We got the fourth course off shortly after, but after that our luck completely dried up. We walked for several hours without seeing another rabbit before we decided to move to another field. It was getting dark, and Patti was getting frustrated being on-line for so long.

We packed up as quickly as possible and headed to another field nearby. We got one rabbit up as soon as we arrived, but it was so hidden by the surrounding bushes that neither dog was sighted. We walked a little ways further and finally got the last rabbit we needed. Patti had no trouble getting sighted, but she took a misstep and tripped a little bit, which effectively kept her out of the course. Oh well. It was very anti-climactic, but it was all we needed to finish on prelims. 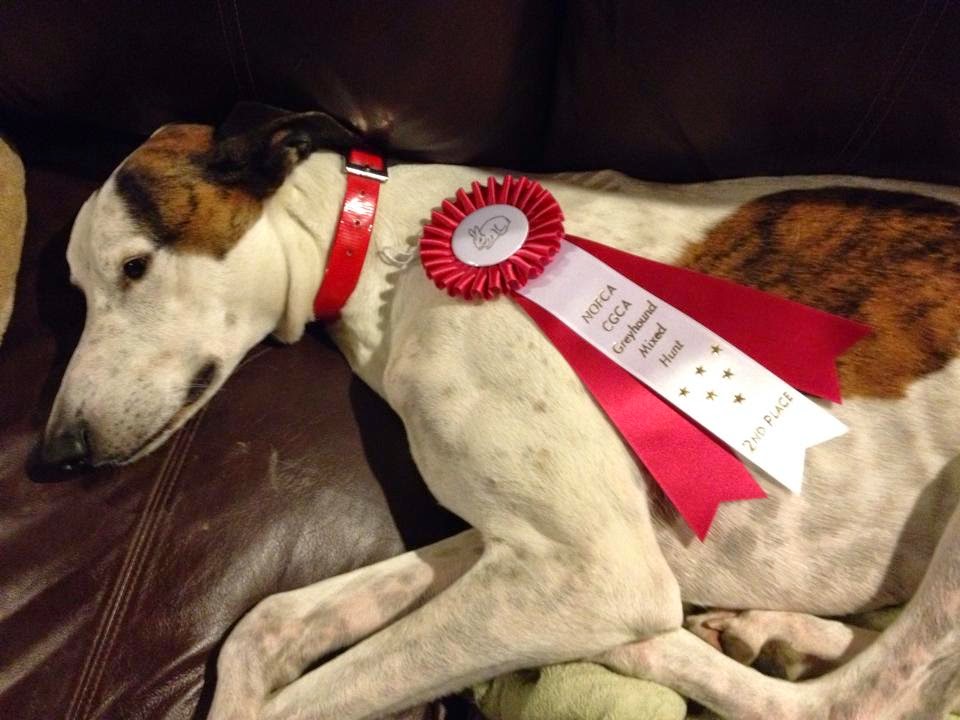 Pi and his 2nd Place ribbon

After all the scores were added up, the two top placing dogs in the hunt were Pi the Saluki (1st), and Baby Pi (2nd)! I was very surprised that Pi did so well, but it really made up for the disappointment of having Patti get such a crappy run.
Posted by Stoutheartedhounds at 10:52 PM