We had a very nice little weekend of UKC shows on the 22nd and 23rd. The Norcal APBT Club hosted a small specialty show in conjunction with a weight pull and we ended up going home with a lot more than I expected. The first day, Gil, Willow and Belle were all entered in the Champions class at the specialty with judge Dennis Blickenstaff presiding. Gil must have been feeling extra good that day because not only did he take Champion of Champions (for his second Grand Champion leg) he went on to win a Best in Multi-Breed Show!!! Not bad for a dog that isn't too crazy about showing. I think it has something to do with the weather; Gil always seems to do well when it's hot outside, which is surprising because hot weather and hounds don't usually mix. Anyway, this is Gil's third UKC Best in Show win and his sixth BIS win overall (UKC, Rarities, IABCA etc). Nellie Belle gave a pretty good showing as well and took her first Reserve Champion of Champions award. After the show Gil got geared up in his brand new John Deere harness and earned 5 points towards his UWPCH and took second place in his weight division.

On day two Fecni joined the rest of the Champions for the specialty and showed very well, although she did not make the final cut. Judge Mark Golden was presiding that day and, despite Gil's efforts to squelch his chances of winning by refusing to free stack at the end of the down and back, he gave Gil his third Grand Champion leg by going Champion of Champions. This time Willow took the reserve award even though she too was doing her best to show poorly. After the shows Gil amazed us all by earning 10 more points towards his UWPCH and pulling a new personal record. He also took another second place in his weight class. Unfortunately he had a small equipment malfunction so his brand new harness will have to be repaired before it can be used again.

Unfortunately I don't have any pictures from the weekend. The only excuse I have is that I didn't nearly expect to get the kinds of results we did so I didn't bring my camera. Darn!

**Update 06/30/10**
Turns out Bill Hemby caught a candid of Gil and me in the Best in Show ring right before his big win: 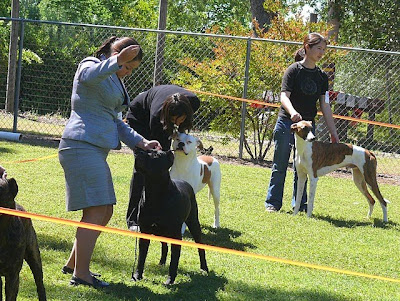 Posted by Stoutheartedhounds at 8:27 AM