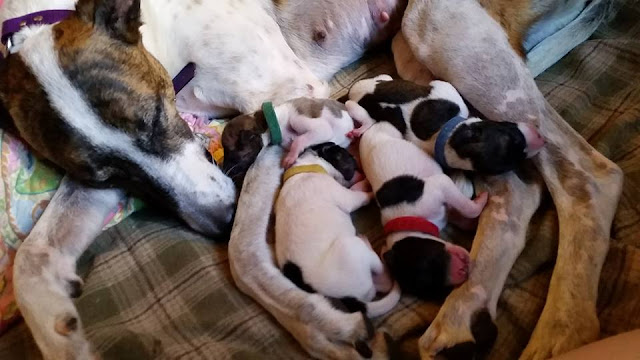 Patti and Gator's puppies, whom I will be referring to as "Pattigators", were born on Wednesday, June 8th. I arrived at Tom's house on Tuesday evening, and Patti was clearly in the early stages of pre-labor. She was restless and panting heavily all night, I felt so bad for her! Finally, around 6:30 the next morning, I was awakened by the sound of her shredding some of the blankets in her whelping box. I looked over at her belly and sure enough she was having contractions.

The first puppy was born a few minutes later, a dark brindle particolor bitch with high white markings. She delivered the pup easily, and after I cleaned her up I put her on a nipple and she latched right away. Patti mothered up instantly, like a good girl; washing her puppy and taking care of the afterbirth. 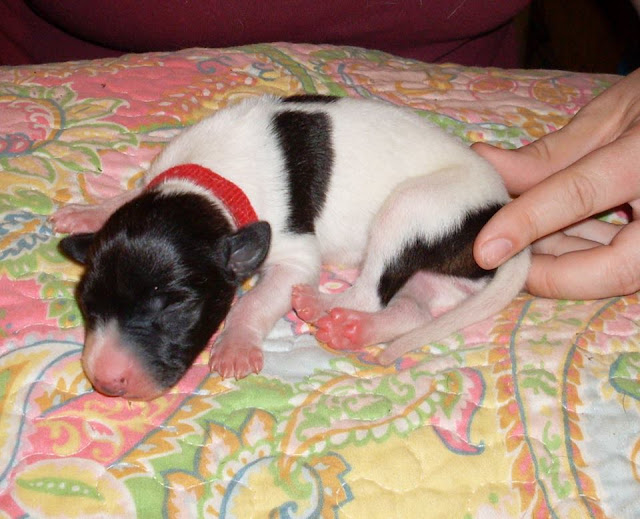 The second puppy came about an hour later, a dark brindle (although not as dark as the first) particolor dog with heavy markings. He was bigger than his sister before him, but still delivered very easily and took to nursing on his mom like a champ. At that point since we had two puppies, I decided it would be prudent to put colored puppy collars on them in case any subsequent puppies were dead ringers for the first two. The first born female got a red collar, and the boy got a blue collar. 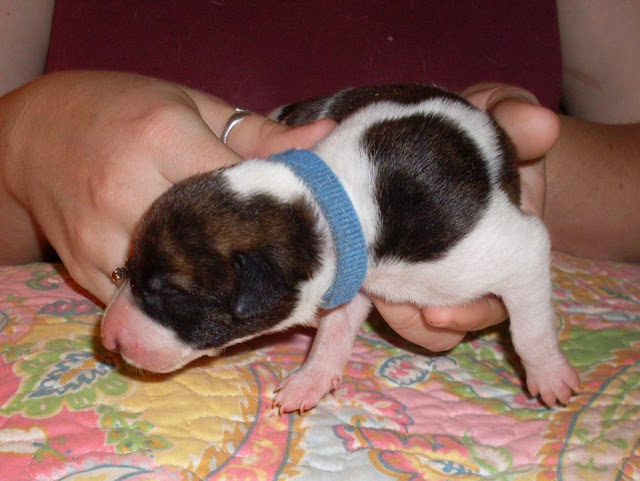 The third puppy took a little longer to make an appearance - about an hour and a half to two hours after the blue boy, and Patti actually had a rather difficult time passing the puppy through the birth canal. I could see the tip of the puppy's nose, but it didn't seem to be making much progress with each successive push. Finally the puppy's head got all the way out, but at that point things sort of stopped. Patti pushed and pushed with every contraction, but the puppy would not budge. I started to panic, as the puppy's little face and tongue were turning blue, so I stuck my fingers as far into her vulva as I could to try and see if I could grab the puppy. Of course, with the puppy all wet and slimy it was almost impossible to get a firm grip on anything, but I was finally able to pull out a little arm, which relieved the tension in the canal and allowed the rest of the puppy to pass through. The puppy was another beautiful particolor bitch, high wight markings, and she was definitely the biggest of the three at birth. We decided to put a yellow collar on her. 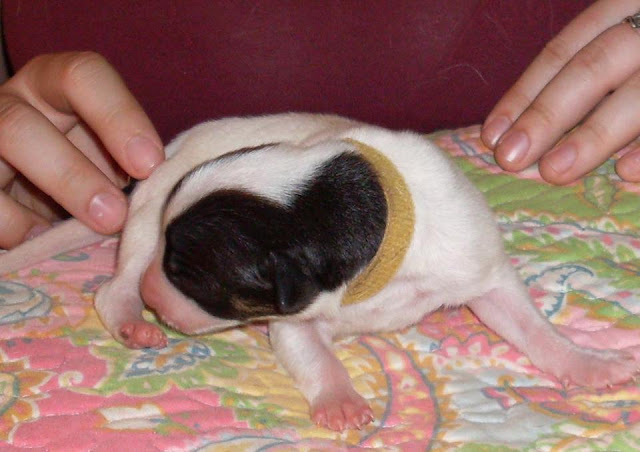 The fourth puppy took about two hours to make an appearance, and when it came there wasn't much labor involved at all. Almost as soon as I saw the tip of the puppy's muzzle the rest of him just fell out. A quick birth can be problematic in that the process of labor is what kickstarts the puppy's reflex to latch and nurse. As such, puppies born in this manner can have a hard time eating and gaining weight. I had experienced this problem once before with a Dachshund litter that a friend of mine had bred, and sure enough this little puppy did not want to latch right away. He was a beautiful light brindle particolor with heavy markings, but he looked almost half the size of his brother and sisters. Adding the fact that he wasn't eating well, I was pretty concerned, so while we waited for the next puppy to arrive I had Tom go out and buy a bottle and some puppy formula. 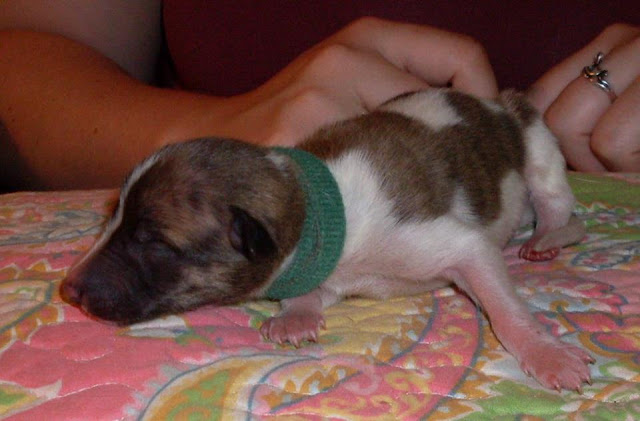 As soon as I got the little runt puppy on the bottle he ate very vigorously, so I was pleased to see that he at least had a healthy appetite. We decided to put a green collar on him, and since he brought us up to 2 boys and 2 girls even, we dubbed him "Even Steven Green." 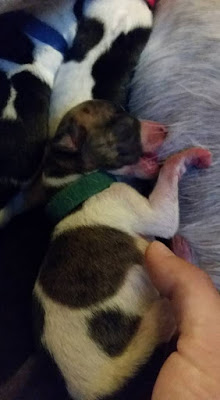 Green Boy learning how to latch

As far as the x-ray indicated, we had at least one more puppy coming, so after the birth of the little green puppy I eagerly awaited the next set of contractions. I waited, and waited, and waited, but they never came. Patti would seem to get restless at times, like she was about to start having contractions again, but nothing ever progressed beyond that. I started to get worried, so I called the vet and asked about it. The doctor said that it can take 3 to 4 hours for the last puppy to work its way down the uterus and into the birth canal, so she told me to just wait and see.

We hit the 4 hour mark and there were still no contractions. At that point it was decided that we needed to take Patti down to the vet to investigate. So, we loaded her and the puppies up into the car and off we went down the mountain to the vet's office. 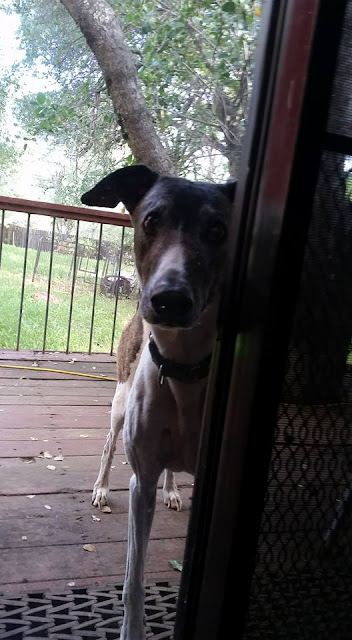 The first order of business upon arrival was to take an x-ray. The first film, taken from the top looking down at her belly showed nothing, so we flipped her over on her side and took a second image. At the very bottom, high up into her rib cage was a very faint outline of a puppy. It was so faint, that we thought it might be a mummy, or at least partially resorbed fetus. At that point, Patti had already received 3 cc's of calcium injections, and it had been over 4 hours since the birth of the previous puppy. So with those factors in mind, the vet decided it would be best to do a c-section.

Poor Patti was very distressed about being separated from her puppies, which made it difficult for them to get her sedated. We waited for what felt like forever, until one of the techs came to tell us that the last little puppy didn't survive. While we were very disappointed to say the least, we were not surprised by the outcome and were very happy to have the four healthy puppies we already got.

Once Patti was awake enough to stand up, we loaded her back into the car and headed home. It was a relief for her, and me, to not be in active labor anymore, which allowed her to relax a little bit and just enjoy her puppies. So, all in all it was an exhausting whelp, but we ended up with four beautiful new Agars! 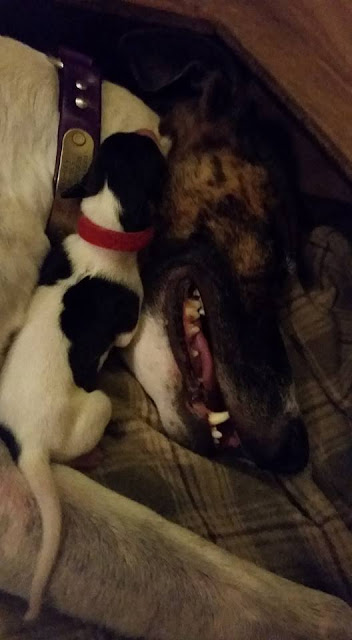 Posted by Stoutheartedhounds at 4:37 PM